Did not do anything on Saturday apart from eat a lot - which was needed I think.

Today's spin was really nice. The weather was perfect - the sun even managed to make an appearance. I wanted to do a longish spin into Wicklow, but was unsure of the road conditions after the snow. So the plan was to keep heading for the Wicklow Gap, and if it got too bad, we'd just turn around and cycle around West Wicklow/Kildare. I met up with Paul and Gene at 10am and headed eastwards. In the low lying areas the snow was all gone, and we did not see any major build up till the start of the climb of the Gap itself. But the road was perfect. So we blasted down the other side (taking a quick detour to the Glendalough lakes for Paul) and had a coffee in Laragh which had turned into motor bike show - I guess its most of those guys first spin out in weeks also. The original plan was to head for the Sally Gap, but we did not want to push our luck, so we headed home via Roundwood, Enniskerry, South Dublin, and Rathcoole. 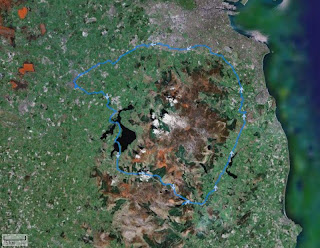 Very enjoyable and a good 120km's under the belt.

Tomorrow is spinning class, and with forecast looking good for the rest of the week, I'll try to cycle to work on Tuesday and Friday. Wednesday may be a mountain bike spin, but the trails are still in a bad way, and might be better off leaving them until the weekend (plus the Cube still does not have a rear wheel).

As a cyclist and a blogger, you may be interested in Global Ride virtual cycling DVDs. This is sort of a shameless communication attempt, but bloggers like you have been the source of nearly all our publicity since our company formed around two months ago.

We have tried to create the best virtual cycling training product out there. You can take a look at it at www.globalride.net - and if you have any feedback, we'd love to hear it.

Thanks for your time. Keep up the good work with the blog.