Very enjoyable race on Sunday - despite all that mother nature could throw at them, for the second year running IMBRC came up trumps with a great course and event in general.

I had no goals for this race as I'd been putting in some pretty dismal performances to date in the NPS. All I wanted was to put in as strong an effort as I could and just play it by ear after that.

Got the pre-ride of the lap done early and back to the car for some chill out time before a good warm up. It was the first time with the new bike so was a little nervous especially with the newly tubless tyres and also the headset, but everything held together nicely so was happy enough. Well until I was heading down to the start of the race when I noticed the front wheel deflating again... Luckily Conor had his hand pump with him so a minute or two of blasting it seem to do the trick. 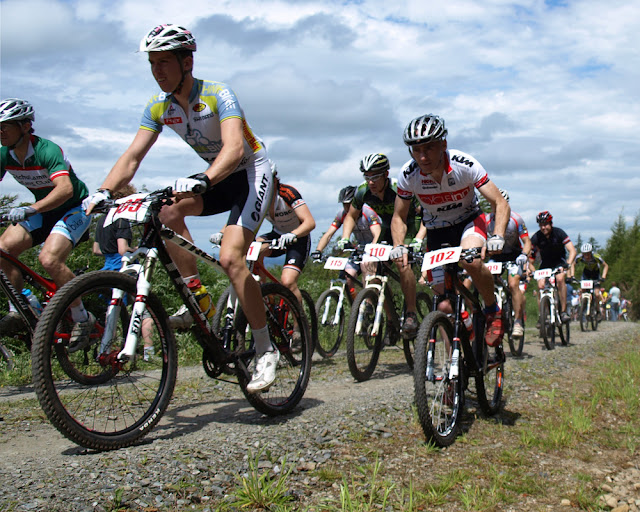 Once the race started no one was full on sprinting up the fire road (well apart from Gareth Mckee), so it gave me time to think (bad idea) maybe I should blast off meself, but in the end I decided to hold off as it was a long climb up to the entrance of the single track. So I was happy to get in there in the middle of the pack, though in hindsight, blasting it up might have been the better option as a few of the guys ahead of me were struggling through the first half of Rabbit ride. I tried to pass a few in the singletrack but nothing stuck (ended up smacking a tree after a tussle with Matt Slattery - totally my fault). Those mistakes just made me want to push harder which in turn led to more mistakes. On lap 2 I took a nasty tumble on the rooty stuff in Rabbit Ride which cost me a couple of places. The air was blue around me after that one, but a little further on I found Oisin on the deck, so it was encouraging to see that everyone was having problems (sorry Oisin!). 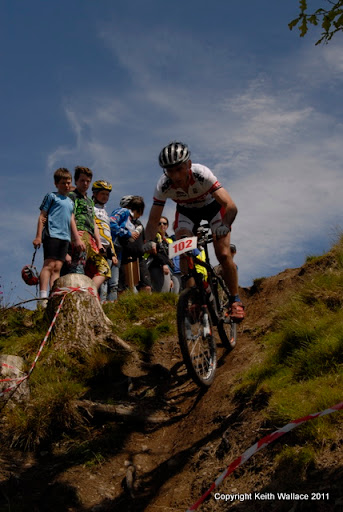 And that was the pattern for the majority of the race. I'd pass guys, then crash/dab, they'd pass me, then I'd pass them again. At one point near the start of Rabbit Ride, I tried to pass someone on one of the steep climbs, choosing to ignore the wet roots crossing my path. So I hit the roots, and get sent off the trail. I was really pissed at this stage, so just pure anger kept me spinning the pedals and I managed to cycle over a tree stump and back on course cursing and spitting as I went - not sure that Evan Ryan made of it all as he was sitting right behind me. :) I did manage to make up on most of the mistakes by pushing hard on the fireroad sections and the last piece of singletrack before the start/finish line, but I'd love to have gotten one clean run through the course to see what kind of lap time I could have managed. 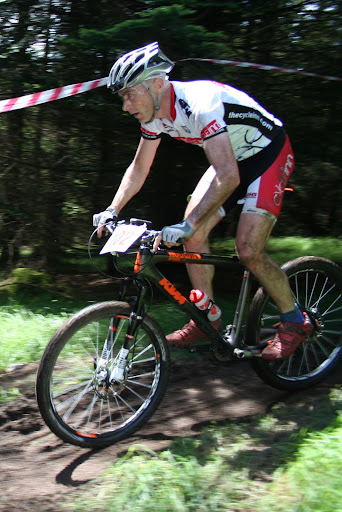 On the last lap, things had settled down. There was no one behind me in sight and only Mark ahead but I could only see him on the long fireroad sections so looked to be un-catchable. But I kept pushing on, knowing that anything can happen in a race. So, when I exited Chomper I noticed that Mark was just coming up to the entrance of the next section. That was enough for me and pushed it hard for the last section. Coming down towards the field I was right behind him and tried a couple of moves but could not squeeze past. It was clear at this stage it was going to be a sprint to the line, so I started to get into the right gear and once I got into the field I moved to the outside and pushed towards the line, and managed to get in ahead of Mark by half a wheel I'd say. I almost took down the IMBRC gantry but that was a chance I was willing to take! As it turned out Mark had a mechanical and was stuck in the granny ring for most of the last lap, so it was not such a glorious victory after all :) 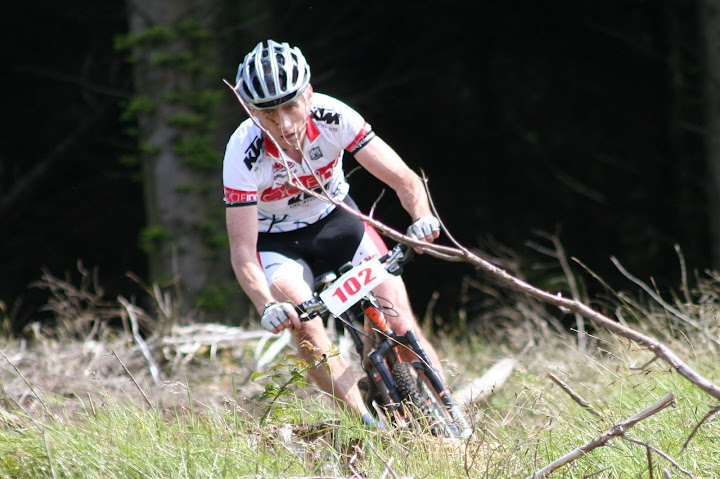 After a bit of confusion it turned out that I'd came 4th in the race, which was surprising as I did think there were a few more riders ahead. I was nice to get a decent result finally (think it equals my best ever XC race finish) but there were plenty of better riders not out racing on the day and some of the guys who were out seemed to be not firing on all cylinders. But all you can do is race who's around you.

I felt pretty good through out the race. I was worried about not getting enough fluid and energy during the race, but I kept downing a high5 gel in per lap and drinking as much fluid as possible, so no cramping for any of the race which was great.

My new bike - KTM Prestige XTR-2 is just a dream machine - simple as. Without doubt the best bike I've ever ridden. 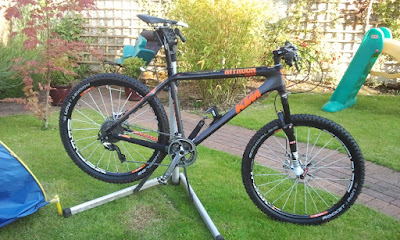 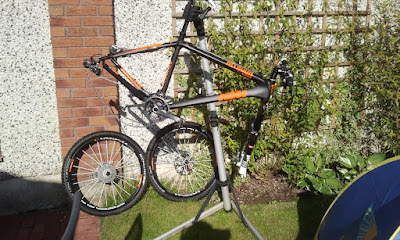 Its super light (weighs less than the road bike I do the occasional race on!), the DT Swiss XRC100 carbon fork is amazing - very plush straight out of the box and very bling :) and the Tricon wheels are both super light and easy to get a tubless tyre onto (a regular bugbear of mine). Finished off with the 2X10 XTR drive train, its the XC hardtail race bike.

Again, IMBRC did an awesome job running another cracking race and its great to see all the other competitors on the day feeling the same way. Also big thanks to Aine for bottling duties and photography and too all the other photographers out on the day. Looking forward to seeing the video!

Next up is the National Champs in Killruddery. Should be an interesting one, but I'm not expecting much results-wise. But like the Slade race I will give it 100% on the day and see where that gets me.
No comments:

Email ThisBlogThis!Share to TwitterShare to FacebookShare to Pinterest
Labels: imbrc, NPS 2011, Round 7, Slade

That time of year again....

Where the magic happens....

Video: Chain Reaction Cycles â€“ how do they do it? from chainreactioncycles on Vimeo.

How the Pro's train

Untitled from XCRacer.com on Vimeo.

Back up north again, this time to Belfast and Lady Dixon park. I really enjoyed this race last year. The course was a mix of singletrack and park land with nowhere to rest up. More of the same this year with a little more single track and parkland and definitely nowhere to catch your breath.
We arrived to a breezy but sunny park about 90 mins before the start of the race. After getting signed up we headed out for a pre-lap. there was the same start/finish straight with a sharp right and left into the singletrack. Then you gradually worked your way down through the forest on a twisty trail. You popped out into open parkland for a full on blast for a few minutes before diving back onto the trail which descended first and after a sharp left on a bridge you had a nice little climb. It was a little dryer than last year so no fear of pushing this time - or cycling into any trees :)

The singletrack continued on into a tricky benchcut section which had a couple of trick blind turns which tightened up so if you hit them with too much speed you were over the edge losing time. after that section you had a super swoopy descent out into the park before gradually working your way back up to the start/finish via some kickers and short descents. All-in-all I really enjoyed the course and the little changes from last year were an improvement.

The start of the race was delayed due to an accident on the course, so there was plenty of time for a good warm-up. About 30 minutes after the scheduled start we were called up for gridding. I was surprised to be called up on the 3rd row (which was essentially the 2nd last row). The race started and a savage sprint for the singletrack. I was second last leaving the start line, but made up a good few places on the left turn into the singletrack by staying out wide. After that it was just sitting in on the train through the singletrack. Everything was going fine until near the end of the second section of trail. There was a switchback which turned into a very steep kicker. I was still in the big ring and in a desperate attempt to drop to the middle ring and also down the gears I managed to drop the chain. There was no way to fix it and get back on the bike there, so that meant a run up to the top of the hill. By the time I was back on the bike I was paddy last with some of the S2's coming up fast. It was very frustrating, but no one to blame but myself.

But I was not going to give up and raced balls out for the next 2.5 laps. I made up a good few places and came up to about 12th place on lap 3. However, coming into the benchcut sections I was so eager to get past a slower rider I took pretty much all the corners too fast, ended up off the trail more than on it and ended up losing more time than I gained by passed her. By the time I got to the last lap I was out of steam and Mark McGauley passed by me. I was catching Rob Tobin, but I ran out of laps and ended up in 14th place.
Looking back on the race I only the 2 mistakes I mentioned above, but they cost me 4 places. Based on the last few races 8th, 9th, 10th is around about where I should be finishing if I make no mistakes. But thats not happened yet and in S1 any mistakes will cost you positions, much more so than last year in Masters. Still, despite that I really enjoyed the race and again had plenty of close tussles all the way through.

Now with the cancellation of round 6, we've only IMBRC's race in Slade left. I'm really looking forward to that race. The course is going to be a little different to last years, with some cracking new features thrown in to mix things up a little :)
More pics from Joanna M (Picasa) here
No comments: