Epic MTB hosted the 2010 National XC champs in Djouce wood on the 17th July. I had not done much leading up to the race - did a road spin the previous Saturday and a session in Glending on the Wednesday leading up to it - as I was busy in work and at home. I still felt OK leading up to the race. My only concern was the course itself as I had not seen any of it - in fact I'd not been in Djouce in 2 or 3 months and with Epic running the race, there was going to be techie bits - not one of my strong points. We arrived early to an already almost full car park. There was a great buzz around the village, with plenty of stands, food stalls and a bouncy castle! We signed on and headed back to the car to get ourselves organised. Just before the sports race started a gang of us from MAD got out for a pre-ride. The course after the start finish line the course moved into a singletrack section when brought you to the lower carpark before the climb up to a slightly extended XTC. Once you were out of that it was walking path over to some of the sections used in the races last year. But some of the sections were taken in reverse, such as the switchback climb up to the highest point of the course, After that you worked your way across to Toro, and out onto fireroad which brought you to GC, and then out along the new straight trail down to the river. Then a small fire road section which brings you to the single track climb up by the step and then across before dropping down to the main fireroad, and sprint back to the lower carpark where you drop to the left and into a bermy singletrack section before entering the field which contains the start/finish line. All in all, I actually enjoyed the course. The only real tricky section was a rough singletrack drop which was about 50 meters long, but otherwise I thought I could handle it ok.

I was gridded on the second row in roughly about 6th place. The whistle blew and I started to lose positions again – but not as bad as usual so I felt happy enough entering the singletrack. However, as we were leaving the second section something happened and my chain dropped. Not sure what I did to make that happen, but it did, so I had to hop off and get it back on fast. I guess 4 or 5 riders passed me while I was getting myself sorted. But I kept my head and hopped back on the bike for the climb up to XTC. Over the course of the first lap I had Dave O’Shea and Mark close by and we were all together until half way through the second lap when I pulled out a gap and managed to get some slower riders between me and the lads on the single track climb. After that I just pushed on as hard as possible. Coming into the 3rd and final lap I spotted Oisin up ahead, so went for maximum effort for the last few kilometers. Unlike the Dromara race I never got too close (maybe 50 meters at best) before the finish line arrived. I was happy though - 4th place! I never even considered a podium in the National champs so to get it was amazing. I stopped setting targets for individual races and just focussed on getting fast, consistent laps in instead. Another thing I wanted to do was not keep something in reserve 'just in case' and instead leave it all out on the course. And I think my racing got better for it over the past couple of events. So thats all the xc done for the year. The Nationals result more than made up for the very mixed NPS season and just motivates me to try to do that bit better next year. So just the enduro and marathon events left which will be a fun way to end the season.
No comments:

Work, family and biking have seriously limited my free time, so I'm going to bundle the last 2 race reports into this post.
Dromara CC, Dunmore MountainIt was pretty much the same course as was used last year for the Nationals - lots of kicker climbs broken up by flatish sections, and a few techie drops here and there. I enjoyed this course in 2009 and felt good leading into the race - all I needed was a decent start...
Which I got :) . by the time we hit the rocky single track climb the group had spread out and were moving at a good pace. I was close to the guys in front and kept pace for the first lap, but they gradually pulled away, while Damo Mulcrone gradually caught up with me. So it was going
to be one of those pressure races :)
Damo continued to close in and seeing him move closer distracted me a little from what should have been my main goal - catching Oisin who was less than a minute up the road. The second
and third lap were all out, and mentally I was ready to give up by 4th place spot to Damo as after all the effort he was still hanging in there. Then, finally the elastic snapped at the start of the last lap. I looked back and he was gone! I then looked forward and there was Oisin in the distance. So, with renewed optimism I chased hard for that first NPS podium...
Unfortunately I didn't work out - I got to about 3 bike lengths of Oisin at the highest point in the course, but on the descent to the finish he pulled away, finishing about 40 seconds ahead of me. Still after the horrors of Killaloo I was happy to be back up the front(ish) again.
Full race report here.
MAD, 3 Rock
After Dunmore I was feeling a little better about racing, and looked forward to my own clubs race - despite the techie layout.
The race kicked off and I had my usual rubbish start which left me in or around 12th position (starting from 2nd on the grid). There was a fireroad section shortly after which allowed me to get back up the field, but again a poor start left me with unnecessary work to do - something to improve on. The race settled down with Oisin, Rob, Andrew and Adam pulling away, and a right battle for 5th place building up with Mark, Kev, Dave and Aaron, Damo and me. The course was great - it had the balance of super techie, with challenging climbs and swoopy singletrack. The only problem was the hurricane blowing into the racers face when they reached the aerials after a killer of a fireroad climb.
The race was going fine for me until about halfway into the second lap. Up until that point I was within touching distance of 5th place and felt that on the 3rd lap I could get past the guys and not be under too much pressure. Well that was until I found it difficult to stay attached to my bike and found myself over the bars twice in the space of 3 minutes on the 2nd lap and once more on the last lap. 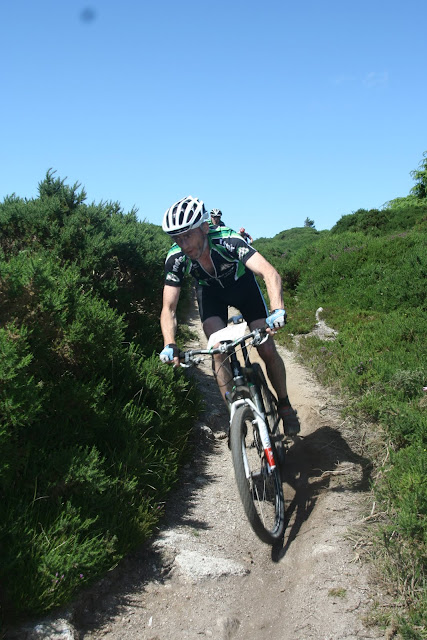 I can't figure out the cause of the first crash. I had caught up with Dave O'Shea and another rider on Sprint and was happy to wait until the next fireroad to pass him. Then all of a sudden I was over the bars and sitting in the furze. I'm guessing I hit something but no idea what. No damage to me or the bike, but as I looked back down the trail I could see Mark and Damo catching fast. So I was back on the bike and pushed hard.... ...only to hit the dirt again in the last singe track section. Again, no idea what I hit, but it was enough to send me flying. This time Mark and Damo
passed me. 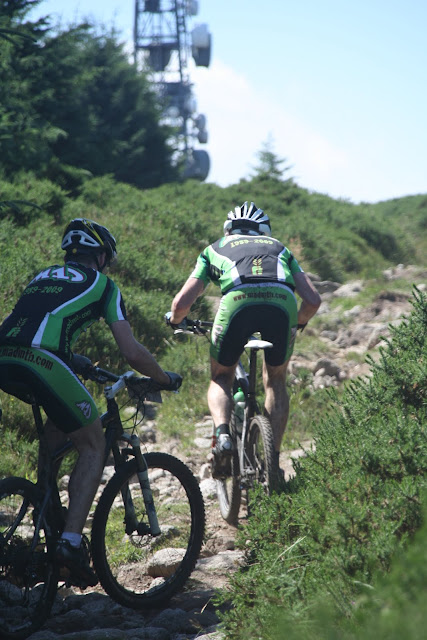 So, back on the bike and off I went chasing. I caught the lads at the entrance to MX and got ahead of them. Mark had a mechanical/crash in Rock and roll and I felt like I might be able to hold on here. I passed Damo on the last fireroad climb and could see the rest of the lads battling for 5th place ahead. I gradually closed the gap and just near the top Mark passed me after putting in a serious effort on the climb. I just got ahead of him again before entering T-connector. However, things went pair shaped again in sprint when, for some reason I decided to go off the nice line and onto a schlompy mud pit where I promptly fell off. So as Mark passed me by all I could do was laugh. Back on the bike one last time and I tiptoed it to the finish line and 9th place

The mad thing was I was still only 40 odd seconds from 5th place. Its quite frustrating, but I had few off the bike moments this year, so to get 3 in one was was probably just balancing out things.
So that was the end of the NPS. I finished joint 6th with club mate Mark McGauley. To be honest, I doubt I could have made it to 5th place - all the guys ahead had either won races or were on the podium in pretty much every race, so can't complain there I guess.
No comments:

Email ThisBlogThis!Share to TwitterShare to FacebookShare to Pinterest
Labels: Dromara CC, MAD MTB, Round 6 NPS, Round 7

Been a hectic few weeks with work, biking and the little guy, but post on its way covering Rounds 6 and 7 of NPS...
No comments: