There were no marathon champs this year, so we had to make do with The Cooley Thriller, and it more than made up!
The race was organised by Cuchulainn Cycling club, and the start/finish was based in the scenic Carlingford village. Over 150 entrants showed up and as usual the masters category was probably the largest, despite my usual rivals not making an appearance. 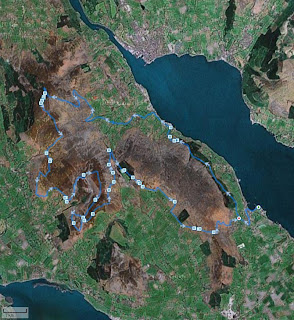 The weather was, again, misty and damp, despite leaving Naas in Sunshine. We got to the yacht club for sign-on and spent the hour or so sorting out our bikes and chatting about what would be in store for us.
At midday we were escorted out of the village up to the Slieve Foy Forest where the racing kicked off. Again, I was down the back when we left the village so by the time the race started proper I was chasing people. First person I caught was Oisin just as we reached the section used in the NPS. Knowing he'd catch me eventually I passed by him - and within a hundred meters of single track that happened. However a few hundred meters up the trail I passed him as he slowed up to repair a puncture which pretty much ruled him out of the rest of the race.
After the single track we hit the tarmac - which was flat initially, but quickly became a serious climb, all the way up to the top of Black mountain and into the mist. At this stage I met up with some with another rider (who picked up my water bottle on a descent - cheers!), and between us, managed to get a little lost. Thankfully, local rider Johnny McCabe passed by and for the rest of the race we were pretty much wheel to wheel.
Once the main climb was completed, we worked our way across various peaks, hitting some seriously fun descents along the way. I wish I could say the view was amazing, but with the mist hanging so low, I could just about make out 50 meters up the trails. Sean caught up with us about half was through (had a pedal malfunction earlier in the race - that is, one of them fell off!) and we kept pretty much together until the last 5 km's where he pulled away (with Johnny).
To be honest, the course was so demanding I was not thinking about where I was positioned - I had Sean and Johnny ahead of me and thats all I needed to keep the pace up. The last 2 kms were an amazing descent down from the mountain. I wished I had a bigger, full suss bike to really enjoy it, but for now it was 100mm hardtail. Also at this stage the clouds lifted and sun had come out. We had amazing views across Carlingford Lough and into Rostrevor - another mtb mecca.
But before I knew it, we were at the finish line. And to find out I came 8th over all - which I was happy with, as 6th place was probably only a minute ahead. But the best news was that I won the masters category - my first win! I was delighted to win the race, but the fact that the main players in the masters cat were not there did dampen this a little, but you can only race who turns up!

Email ThisBlogThis!Share to TwitterShare to FacebookShare to Pinterest
Labels: The cooley thriller

Myself and Arek decided to give the Kildare 100 a blast again this year. Its a sportive in aid of the Marie Keating foundation with Martin Earley (an ex Irish pro) helping out. We did the tour last year for the first time, it was also the first time I cycled in a large group. We also found out that once the cop car left the pace jumped up immediately. We got left behind before we even knew the pace car was gone last year, so this time around we wanted to at least keep up with fast guys. 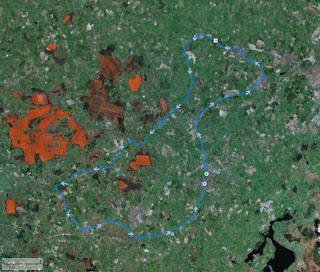 From the looks of things at the start line I'd say there was in the region of 400 to 500 riders at the start, which is quite a handful to manage considering they are all departing at the same time, but like last year, there were plenty of marshals that held up traffic when required. So we headed off around 10am and for the first 20km's we just tapping along enjoying the leisurely aspect of the cycle. We stopped at the North Kildare sports club for tea and food, and after about 15 minutes we headed up the road a couple of kilometers to Kilcock, hanging a left over the canal bridge and on toward Clane.
Another 5km's passed before the police car sped up and kept going straight while the tour hung a right. This time around myself and Arek were up front - Arek in the first 5 or so and me in the from 20 (I think I'm still a little to nice in the peloton - should have been pushing my way yup!)
The pace did not seem to pick up by much this year (or maybe it was the same as last year and I was a lot less fit). So, the first thing I did was head up to Arek and see what the plan was. I still thought the pace was slower - even slower than my usual commuting speed, so after a quick chat with Arek, we decided to head up the front to get the speed up and see what would fall out of it. Not much was the answer - a couple of guys came up to help out but not enough to do the up and through working properly. Arek suggested we just drop off and let someone else set the pace. Wise words, which I did not heed, and up to Robertstown I did my best to keep everyone up the front honest :)
When we got to Robertstown a couple of guys jumped on the first climb (well, lets call it a kicker - it was pretty mild), but we had them back in after a couple of hundred meters. Again, the pace slowed down and I decided it really was time to hang back. The next major climb was coming into Kilmeague which shook things up a bit I got a little caught and was chasing up the hill and down the other side before I got back with the lead group.
I was there or there abouts when we reached the big climb of the day - The Wall. Funnily enough it did not seem as hard as last year. My biggest problem was with getting blocked in by slower riders on the climb. I finally managed to catch back up with Arek near the top. From there it was a sprint down the other side and through Kildare town. At this stage a lead group of about 20ish had formed and the pace had really picked up. As we hit the Curragh I got to the front and put a big stint in, and as soon as I did I realised I was blown. Guys started coming through and kept the pace high. I started to go backwards, but as we crossed the motorway had managed to hold the gap to about 50 meters. However, try as I might, I could not bridge the gap back up. Even a motorcycle marshall tried pacing me back, and he even let me draft him, but to no avail. I watched the group of about 10 slowly pull away - with Arek in it!
As we left Newbridge I dropped the pace and let a boards.ie rider catchup. 2 riders working together had a better chance than one. And at one point we did catch a glimpse of the back of the lead group, but again they vanished around a bend and that was it. So we kept the pace up and pushed on to the finish back in Naas, and in the end we were only a couple of minutes behind the lead group. We even got a round of applause which was nice!
I know, I'm talking about this charity cycle like it was a race, and to all intents and purposes, the second half was, and great fun too! The marshals were great, and the food after was class too. I'd highly recommend the tour of Kildare to anyone who fancies a bit of bit to their sportive!
No comments:

Email ThisBlogThis!Share to TwitterShare to FacebookShare to Pinterest
Labels: Tour of Kildare 2009 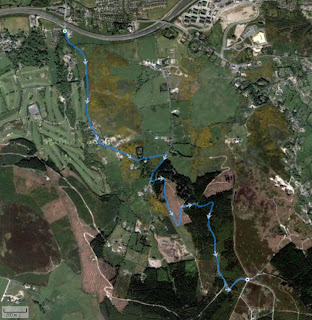 Point to point is just a touch under 4km's, an average Grade
of 8.1% (with 2 flat sections - feels more like 10% average) and 318 metres of climbing.
I'd decided to give it a lash as had never done any type of TT
before, never mind one that had you spending most of your time pointing skywards!
I arrived early and did a quick spin up to Ticknock to wake up a bit (baby awake a lot of the previous night meant I was a little worse for wear). I've also been doing a lot of cycling in and out of work these days for money saving and training, so the legs were a little sore too. We had about 9 at the start line, with myself,Sean, Cait and Ryan from MAD and the rest from Boards.ie. Mel was time keeper for the event.
With everyone leaving in 1 minute intervals, I was the 8th person off (or there abouts). After the warm up I decided the big ring was going to be off limits for most of the run, and instead would try to keep it in a big gear at the back. To be honest the run itself was boring - not like an mtb race where you have climbs, drops, singletrack to keep your mind occupied. What made it interesting is the mental focus and trying to keep the pace up and not giving in to the negative thoughts that float around your mind like hoping for a puncture/spoke to break etc.
I passed Cait first (who was on her mountain bike in fairness!), then a couple of the boardies, and made it to the top in 15 minutes and 16 seconds, which was the 2nd fastest of the night, with Ryan first at 12.34 and Sean just behind me at 15.21. I did slow up at the end so I may have given up a few seconds there but that was as good as I could do on the night.
Despite the pain, I really enjoyed it. Its just a different way to push yourself up a hill fast. Sure you could do it by yourself, but knowing there is a person 1 minute behind and ahead of you is very motivating. Ryan is talking about running another one in a couple of weeks, but this time maybe up Cruagh, so I'll be out for that too.
2 comments: