Zero update really. It was work all week, with little time for anything else. I did manage to cycle to work one day, but the trip home, late at night and in the rain was not very enjoyable. Hopefully this week things will ease up this week and I can get some spins in and out of work.
I've not been on the mountain bike in 3 weeks now, so I'm keen to get a night spin in this week also if possible. With the club champs on this Saturday, need to get the feel for cyling off road quick!

I did manage to do some work on the new bike. Changed the bar and post, got the crank on and brakes. All thats left is the 180mm rotor which should arrive in a day or two. Once its fitted I'll drop the bike into the cyclesuperstore to get some bits and pieces I don't want to or can't do.

Almost came off the BeOne on the way into work on Wednesday. Hit a bit of ice on a roundabout. Then I realised its time up upgrade the tires. I got 4 Maxxis Detonators. They come with more on grooves and grips so I'll feel a little more confident on the wet stuff. A nice plus is that they come in a shade of blue that perfectly matches my bar tape - happy days :)

Plan for week:
Cycle to work on Tuesday, night spin Wed, spin to work on Thur and Fri also if possible.
No comments:

It was a good day for a spin - cool and fairly dry. The lads left Tallaght and the lads made it to Naas in one bit an hour later. From there we headed out to Caragh, Prosperous, Clane, Celbridge, Newcastle and Rathcoole. The Dublin based lads headed back towards Tallaght and we shot back down to Naas. All in all it was 62km's in 2 hours 20 mins. No climbing at all. Next weeks will be out towards Wicklow I think and will be closer to the 100km mark.
No comments:

Yes, went out and got next years bike... this year. Its a 2nd hand Giant XTC. The frame's about 4 months old and components are this years. Going to make a few changes to it, namely:
Otherwise, I think the bike is spot on. Its got a nice set of Wheels (Hope pro 2's with Bontrager rims), and a Fox RL 80 fork which I have on the Cube and are the business. Going to stick the ODI Rogue's on from the Cube and replace them with the set of CRC flood sale Yeti's I got last week.

I don't plan on actually riding the bike at all till the new year, but I might be tempted to bring it out for a trail once I get all the changes made.
2 comments:

Email ThisBlogThis!Share to TwitterShare to FacebookShare to Pinterest
Labels: 2009 bike

A couple of photos from todays round of the Supercup. The ground was'nt wet enough for my liking but a good day had by all. 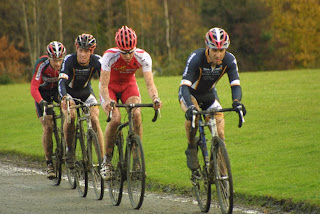 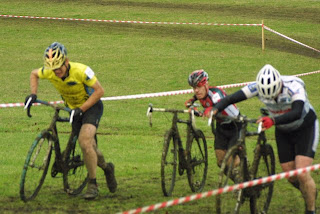 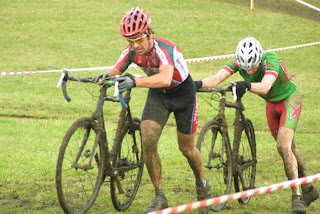 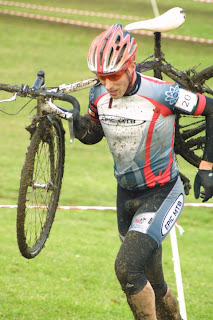 All work and no play

Well, possibly. Been a quite ish couple of weeks due to work. Got out for a couple of fast spins on the road Tuesday and Wednesday, but no Mountain biking since last Sunday, which is a bummer. I was busy last Saturday and Sunday was the club cyclocross race where I was marshalling and marking the trail.

Decided to cycle to work today - if I'm working late, I might as well make use of the commute. So pulled out the slightly rusty BeOne and trundled off. Its still bright at 7.30am, but by the time I was heading home it was dark. No big deal as almost all of the 22km is lit, but there is 5km section which is essentially a back lane with no street lighting. To be honest, with the day-glo jacket, Blackburn rear light and MiNewt, any driver who could not see me from 200 metres needs their eyes tested. Can't cycle in tomorrow, but might on Friday.

Saturday is the first club training spin on the road. Looking forward to it. It'll be 3ish hour on the flat, starting in Tallaght. I'll probably cycle up and back from Naas - depending on the route.
Been going nuts on CRC. Got my Met Veleno Helmet, which is the best thing since sliced bread. Another, slightly bigger, Top Peak saddle bag for the mountain bikes, I did get a new stem for the road bike, but decided I did'nt like it so its getting sent back and got a Pro PLT. And there's more! XTR pedals! No idea why, guess I want to have the best bits on the race bike :) . But that's it I think... well unless I go carbon with the seat post, bar... and then maybe replace the saddle. I think the only way to stop spending is to get out on the bike more often...

Spending cash, coughing, and not cycling

Right, first off - I'm not impressed with CRC. They decided to have a sale on their flood damaged stock just when I planned on not spending any cash on bikes or bike related stuff till the new year. Its funny how the road 'sale' affects the mind. All of a sudden I was buys bars, grips, cassettes, chains and God knows what else (all that clicking 'add to basket' became a bit of a blur). There happen to be non-sale items in my basket too, but I just thought what the hell and bought them too. The sale was great though. I've pretty much bought a complete replacement drive train for the Cube - I'm thinking it'll start causing problems early in the new year, a really nice carbon bar, and a 100mm stem for the road bike among other things. Happy days.

Also made another significant purchase this week, but more on that tomorrow...

I'm still fighting the sinus monster, but winning. While the pain can be bad, a couple of sinutabs will sort it out. What's worse is the tireness caused by the lack of sleep. Last nights kip was good, so I hope to get out on the road bike tonight, and maybe a spin around Glending tomorrow for an hour, and then a big mtb spin on Sunday.
No comments:

Email ThisBlogThis!Share to TwitterShare to FacebookShare to Pinterest
Labels: kit

As the song goes. Thought I was coming down with a cold, turns out its my dreaded enemy - Sinusitis! I've been getting it for the past few years, the last time was August 07 when it got so bad I had tooth ache in both jaws and eyes so sore I had to keep them closed all the time. This year I've done well not to get it any sooner. I think it might be down to the serious up tick in biking. Once I realised on Saturday is wasn't a cold I pulled out the Xyzal and Sudafed. Today I feel much better, but will probably keep taking both for the next couple of days just in case.

It didn't stop me getting out to Glending on Saturday afternoon though :) . It was a very handy spin - Gene was getting over a bout of sickness too, so we just tootled around, a bit of trail repair here, some exploring there and hit all the drops a good few times. In the course of finding a route to the double drop we found a perfect climbing challenge. Its about 80 metres long, its straight, and not too steep. But the killer are the roots, sooooo many roots! Gene won the first round, getting about 50 metres up. I got close but no cigar. Its a great section to work on your climbing over roots and other obstacles so it'll become a well worn section.

Its going to be busy in work for the next 4 weeks or s0, which works out well for me as I wanted to cut down the amount of cycling in the build up to the training kicking of at the end of the month. But I hope to get out on a road spin tomorrow and Glending on Wednesday. The weather for the week is good, but the weekend and next week is bad so want to get as much off road done as possible before things turn schlompy.
No comments: