I've been trying out Strava for a couple of weeks now and I like! Ryan Sherlock has been using this for a while now and its huge in the US. While mainly a roadie website, but nothing to stop it being used off road too.
The idea behind it is simple - you upload your Garmin spin data (or a .gps file creating using an Android/iPhone App) and it does the usual stuff (displays route on google maps and usual data on distance metres climbed etc). But what makes it interesting is that you can create segments, which are basically sections of the route which you or other users have designated. So Strava will give you a time (and power data based on physics calculations) for that segment.
The fun bit is when someone else cycles along that segment on their spin and they upload the GPS data, Strava sees this and then figures out who was fastest on that section. This adds a bit more interest to the spins as you can target a route and look to post the fastest time up it.
This is an example of a segment that myself and Sean are duking it out on.. http://app.strava.com/segments/655133
No comments:

Email ThisBlogThis!Share to TwitterShare to FacebookShare to Pinterest
Labels: strava

Yeah, its been a while Srivo...

Since Davagh forest I've been doing a few bits and pieces. The familiar 'work' and 'home' interruptions have been playing havoc with training and just about everything else. But here's where its at:

IMBRC Club League
The league kicked of again last month up in Slade. I did a few races last year, but this time I wanted to take it a bit more seriously as its great training for races, plus its all done in 35 mins. The first race up there was a bit of a disaster. Well, I was happy with the laps, but as I was entering the final section of singletrack I came unstuck from the bike and landed head first into the group. Can't say exactly how it happen as it was so quick - one second I was hammering down the trail, and the next I was picking myself up off the ground. In the process I cracked my helmet and had a killer headache for about 3 days, but I also manage to feck up a rib. Just bruising I think but hurt a lot for about a week. The following couple of races up there went a lot smoother and were great craic. Missed this week, but plan on getting back out next Tuesday.
New 3Rock trails race
Now this looked like it could have been fun. To coincide with the opening of the new trails, Niall Davis had organised a race using the trails and fireroad. Fairly straightforward route - up the tarmac road, around the aerials and onto the new trails, then back up the fireroad to the aerials and down the new 2nd section of singletrack. Nice and simple. Lots of strong riders were out so it was going to be a hard race, but a good challenge. Very soon after the race started the field began to spread out and by the time we reached the first trail there were just 5 riders in the first group... and I was the 5th! I figured if I managed to keep it together I could get a good result here. Well, that was the plan, unfortunately as I was about halfway down the first section of singletrack I clipped a rock and ripped my front tyre to the extent that the the sealant could not do its job. Needless to say I was raging and had plenty of time to wonder 'what if..' on the long walk back to the start line.

NPS Round 4
Another NPS, another trip up north. This time to Tollymore. A lovely part of the world and my first time up there. The course was great - plenty of tricky singletrack - made all the more tricky due to a good soaking in the week leading up to the race. There was a couple of small climbs but nothing too hectic. The race started and I was quickly dropped down to the back. But started to make up time in the single track pretty fast. The biggest problem was trying to pass guys and make it stick. The first lap and a half was hard work doing that, but on the drop I made a mistake and 4 or 5 of the guys I had passed cruised by me, which was very frustrating and I ended up back at square 1 again. me not crashing (Photo: Mike Armstrong)
The rest of the race was spent attempting to pass these guys again. There was some close racing and it was good craic, but finishing 15th was very dissapointing. To be honest, I think the best I could have done there was 10th, but that would have required me having a race with no mistakes... something thats not happened yet!
No comments:

Another 5 hour round trip to a race... but this time it was well worth it.
For round 3 we headed to Tyrone and Davagh Forest. It was my first time in that neck of the woods and I was mighty impressed with the scenery. Myself and Stuart left at 9 and pulled in about 11:30 - perfect to get signed on, setup and on the trail. I got back into my normal routine of showing up when the car-parks were already full so down the road a bit, shoved the Primera into a ditch and got unpacked.
I was cautiously optimistic when I saw a catering van in the car-park and when we got down tot he main start/finish I was well impressed as Carn Wheelers had laid on bouncy castles, and a couple of marquees with other bits and pieces. I got signed on with no hassles and picked up by chip before heading off pre-lap. The course was amazing. Lots of variation with single track, double track, rooty forest bits, narrow bridges and some kicker climbs thrown in too. The most fun was in the final kilometer where there was a narrow sandy sweepy trail that brought you back down to the river. It was a cracking course and poles apart from the last race in the Nagles.
For a change I started warming up 30 mins before the official start of the race. Its one thing I never do right and wanted to be ready to go from the whistle. Unfortunately the race start was held up for about 20 mins but I kept cycling about to keep warm.
I messed up the start line. I should have went to the front and then let the gridding happen, but I ended up down the back on the inside. This was a problem as shortly after the start there was a left turn onto a narrow bridge. So the whistle went and sure enough I ended up paddy last just after the bridge. We started climbing and I got myself back into the group. I was keen to push up further before the single track but the road was so narrow there was no chance. We took a left into the single track and again had to wait while everyone streamed in. Another lesson learnt - get into the singletrack first!
We came around for the first lap proper and I was already 30 seconds down on the leaders. Then I made my second and last mistake of the day. Coming over the finish line there was a sharp right turn up into a singletrack climb. As I came up to it I thought it could be cut and there was a chance to make up a few places. However when I got over the bank it dropped down into a ditch and I was stuck. Off the bike and running up the hill I was wondering how I get myself into this situations. Anyway, I was on a mission then and powered my way up the first section and managed to pass 3 or 4 of the S1 riders. Then it was full blast into the first lap proper. Until I got to the second section of single track where I was held up a bit by slower riders. (Pic: Mike Armstrong)
We exited the trail onto a long section of fireroad and I got a 1 or 2 more riders there. On the start of the 2nd lap I managed to pass Vinny and Dave from Team WORC and also passed James McCluskey (who shortly afterwards realised he was in a race :) and ended up in 4th place). I was feeling great during the mid-race and pushed on. I passed Ciaran from our club also but he looked like he was having back problems. Things were going fine until the start of the last lap, I was happy enough the way things were going on the 4th lap and slowed up a little (or so I felt). But when I looked back on the start of the last lap I saw riders coming up to me. First I thought I was being lapped but as they got closer it turned out to be Ciaran, Vinny and Dave! They had paced their way around the previous lap and were closing in on me. The 3 passed me about half way through the lap and all of a sudden the legs felt dead. But instead of trying to go balls out to get on their wheel I just upped the speed slightly and slowly worked my back. 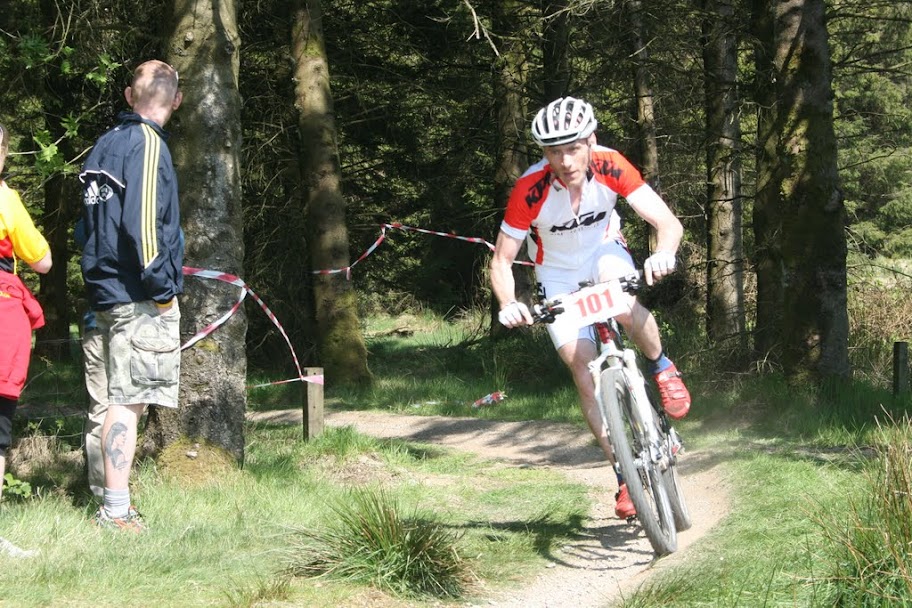 In the last Kilometer Ciaran and Dave were out of sight, but Vinny was close, so I pushed hard enough to force him to up his pace, and as we came into the singletrack before the bridge Dave was also in sight. As he crossed the bridge he hit a wet patch and the bike went from under him. Vinny and I got by and I monstered the bike up the kickers onto the final piece of single track before the finish line, even managing to get into the biggest gear to see if I could make the last place up. Unfortunately it didn't happen and I came in 3 seconds behind Vinny.
Despite coming 9th out of 14 finishers I was happy - mainly cos' I managed to finish a race! But also that I got some close racing too. There was only 30ish seconds between me and 6th place and a podium was only 2.5 minutes away, so very happy with how it went and looking forward to the next race.
The KTM Myroon was running perfect today also. I've almost got the setup finished, just one more tweak and I'm happy. But I'm especially happy with the SID XX fork. I was never a huge fan of Rock shox forks, but once I got the SID dialed in I've found it amazing. The lockout was pretty handy too on the less technical sections.
No comments: