Been buying some bits and pieces over the past week, and a batch arrived today!
First off, my http://www.dealextreme.com/ goodies (minus the main light which is on its way). I went for a 900 lumen torch type light that I'll be strapping to the helmet. It'll mostly be used for commuting but will be good for night rights too when used with the Hope Vision 4. Its got about 90 mins on full power so its plenty for the spin into work. And if it turns out to be as good as everyone says, I might go get myself a second. I also got a couple of rear lights. They were about 2 Euro each and take 2 AAA batteries. Not quite as bright as the Blackburn I have now, but about 20 Euro cheaper! 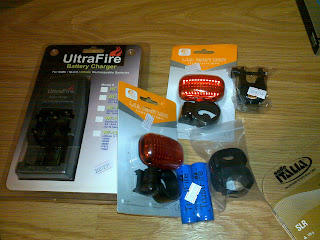 Next are the Ashima AirRotors for the 2010 bike. These got a good review recently, and in general I don't hear too many complaints. I had Gusset superlights last year, which were light, but bugger all stopping power. These look that bit better (ie, more metal for the pads to rub off of!), so looking forward to trying them out with the XTR brakes. 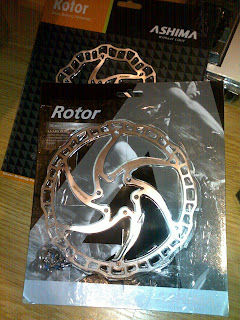 Next, XTR pedals. Yes, probably feck off performance difference between these and XT, but I like them. I had them on last years race bike and never had a problem. 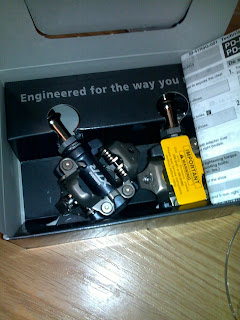 Got some XT rotors on the cheap as the Cube's are on their last legs (almost 2 years of continuous usage, can't blame them) 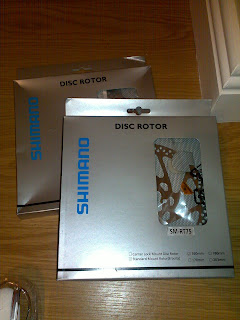 Another 2010 bike bit, Selle Italia SLR saddle. I had this on the Giant XTC also and thought it was the dogs - thats why I got the same model again. And they are about 30 Euro cheaper than last year too! 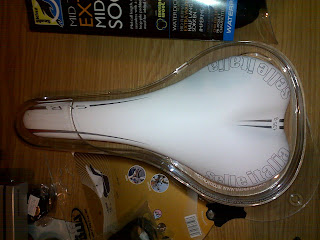 Finally, got a new set of Seal Skinz - only 24 Euro from Merlin - can't beat that! (tho I'm sure someone will) 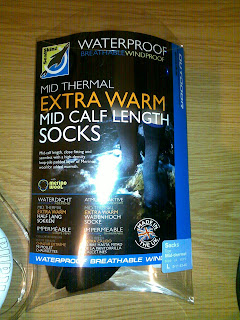 November has been a quite month really. A few mtb spins - not many, and cycling into work a couple of times a week. The off road spins have be just for fun which is nice. And this was the first weekend where I did not get on any bike at all.
However, I am starting to plan a few things for next year. I'm figuring out a training schedule for a start. I did one of these last year too, and didn't follow it at all, but I think it helps you get thinking about the types of training sessions you need to do and how much time it'll all take up. So I'm going to include the spins into work as training, and maybe once a week have an extended spin home. I'll also be going to be Pure Class fitness for the spinning classes and also the circuit training. There will be one or 2 anaerobic sessions and a long (4 hour) weekend spin which will be on road or off road. Thats roughly the plan, but the devil is in the details so I'll need to be putting dates and times to all this stuff. I also pulled out the turbo trainer today. I found it pretty useful during the really bad days and evenings when I should have been out.
The plan is to start training proper in December, but to kick it off at an easy pace - it'll be almost 4 months to the first race so plenty of time to get into shape.
I'm also working on the bike for next year. I've already got XTR brakes (the best brakes bar NONE!) and a Magura Durin fork. It'll be my first time using Magura and I'm a little nervous about that as I do love my Fox forks, but I hear super things about the Durin's so looking forward to attaching them to a bike!
Finally I've been figuring out the races for next year. On top of all the Irish NPS's, K-cap (if its on), XC and marathon national champs, I'll also be heading to the UK for Sleepless in the Saddle and the Bontrager 24/12. Myself and Oisin will be racing as a team and I'm really looking forward to those races. What's also on the cards is the ROC in October. I'm interested in the marathon race and the ROC itself, so need to get my ass in gear and sign up.
5 comments:

With all racing done for 2009, its probably a good time to take a look back over the year.
All the training effort seemed to have paid off at Round 1 of the NPS, came just short of a podium that day. I was delighted with 4th as my goal was top 10 - which I suppose was a little conservative in hind site.
Things went downhill the next week in the Des Hanlon Memorial race where I damaged some tendons. That put me out for about 2 months.
I mad it back for my own clubs race, and after zippy start, finished about 10th. And that was about the average finishing result for me for the rest of the NPS season.
Things improved in the K-cap series - some late season training resulted in 7th, 11th and 4th in masters cat.
I also won the master cat in the Cooley Thriller - my first race win. However I think the 4th place finish in the last round of the k-cap was more satisfying as all the big guns were out and I was less than a minute from 2nd place.
And thats 2009 in a nutshell! So 2010 plans are coming together. They'll involve a new bike (the Giant is gone, sniff!), a new training plan and oversea's races. And all to be done with even less spare time now I'm a dad. Still, I'm pretty confident I can push on from this years results - a few more podiums and maybe a couple of NPS wins maybe?
So keep an eye out for some important posts in the coming weeks!!
No comments: