Spins for the week

I helped out on the MAD Beginners spin on Saturday. There was a great turn out - roughly 20 new people out. We went to Kindlestown / Glen of the Downs. Because of its location I don't get out there that often, so it was nice to get out there and remember how much fun it is. 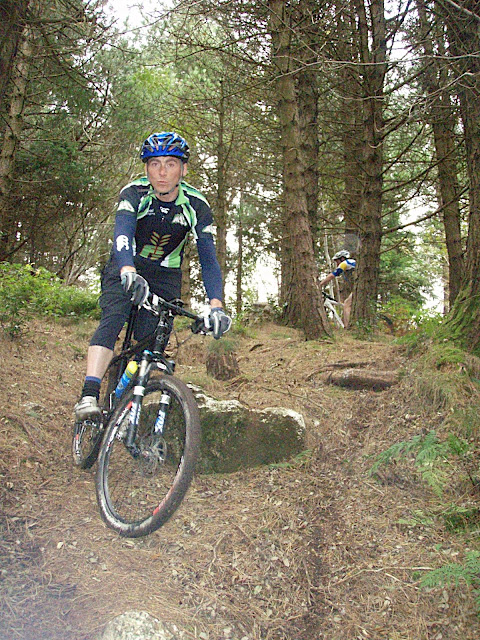 We did a couple of loops of Kindlestown before heading off to GOD, where we had a lot of fun beating about the place and also trying out some of the more fun drops. No one got hurt and everyone had fun (I think).

I was out on Saturday night so was a little worse for wear on Sunday. Managed to head up to Slade valley to check out the trails. It was a waste of time as most of them are now covered by felled trees, golf course, or just over grown. So I just did one loop and headed off to Glending. As usual, it was fun, although I managed to wallop my knee off the handle bar at one point - leaving me with a huge bump on it. The base of the switchback descent is getting cut up by motocross riders, which ain't very nice, but not much you can do about that.

Tonight, its back to Glending for a night spin with Gene. I hope its dried out a little...

I've got tomorrow off, so myself and Gene are going to do a long road spin - probably heading to Glendalough and onwards.

Saturday - a road spin, or a good spin in Glending

Sunday - Beginners spin, but might do a longer spin afterwards.

So a lot happening. I think I need it as definitely feeling a few pounds creeping on :)

Jaysus Richie - you're looking very pouty in that picture.

I'll have to stick this blog on the front page - get some traffic heading your way...

Umm, I puckered up fort the photo - I can tell you for a fact it wasn't the collagen implants I had the day before...