Finally got my first road race under the belt, and boy was it a tough one! After the Newbridge GP was cancelled, I was definitely not missing the Des Hanlon Memorial race hosted by Carlow CC. 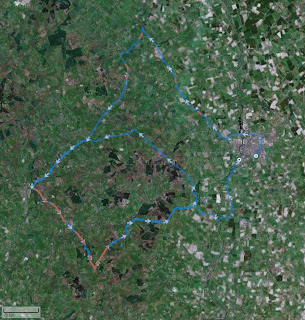 I did not put much preparation in during the build up - by my recent standards I took the preceding week off (3 spins!). But I saw this race as just training and a fun way to spend a Sunday afternoon. My club mate Arek was also going to break his road cycling duck. With a bit of arm twisting I convinced him to do the 110km race (as opposed to the 60km one).


The race started in Eire Og GAA club - dead nice changing rooms etc. Ryan and Mel had also decided to give the race a go, along with a few mountain bikers from WORC, Team Rocky Mountain and Epic. It was nice to see some familiar faces out.

Did not bother with a warm up as the first few km's were neutralized, plus I thought with wind blowing about, no one would fancy leaving the comfort of the main group. And it pretty much was like that for the first hour. OK, there was the odd manic periods where the group decided to chase down certain break aways, but for the most part we just happily lolled along. At times the pace really dropped down - to an extent I was started to get a bit annoyed. Hah! That all changed rather quickly when we hit the first proper climb...

So there was me, Mel and Arek, happily minding out own business in the middle/back of the main group. We were coming up to Castlecomer and the first real climb. I only knew this because my family are from around the area, and I did not really know exactly how steep the climbing was. I actually said to Mel that if the group was together for the second lap I'd go for it on that climb!

So, hard left and drop down. Then up. As soon as the leaders took the turn, they were off. The initial section was one of those climbs that Mountain bikers love. Steep and (seemingly) short. I could see that the increase in pace had messed up the group - there were bikes and bodies everywhere on the climb. I powered up the hill in my mountain biker way, and then came around the corner to see the climb extend onwards, and the leaders already around the next corner. OK, I'll just keep the pace up. So around the next corner and the climb eased off, but continued another 300 or more metres. As this point I knew I was in trouble, the main group had powered off, leaving a bunch of us trailing in its wake. It took a kilometre or too before a group of 6 formed. Myself, Mel, Arek, 2 Epic riders and a couple of other guys. I decided at this point the best thing I could do was get Mel back to the main group to give her a chance of fighting it out there her one and only competitor. So I got to the front and pushed as hard as I could. The Epic guys jumped in and for a while we were definitely making progress - probably only a couple of hundred metres from the comfort of the main group. But we turned a corner and they were off again. I was gutted. We got to the top of the climb and I went to the front. I was a flat section with a nice tail wind. We were topping 50kph up there, but still could not get in touch. Then I started to feel a twinge behind my right knee. At this point we had been chasing for 25 mins full on. Mel went to the front and drove the group on, but I was cooked. I coasted down the descent, had a gel and drink and got my breath back. At this point Mels group was out of sight. I was descending down to begin the second lap of the course, and into a headwind.

In the second loop I passed lots of guys who where heading back to Carlow. I guess it was a case of once dropped from the group, they saw little point in continuing on. I just did not get that - you've never give up in a mountain bike race. OK, it's a different type of race, but surely you would continue on just for the exercise?

Anywho, once I got the full effect of the headwind I seriously considered heading back myself. Only the signpost showing 5km's to the climb (and nice high ditches to break the wind) kept me going. I came across a lad who was in the inital breakaway - totally cooked. We had a chat for a while, and I headed off again. I felt pretty strong on the climbs, but the leg pain was becoming more pronounced. At this stage there was no turning back. With almost all the climbing done I was going to get to the finish. Queue some hairy descending down dodgy pothole filled roads before a left turn and 5kms to Carlow. Probably the most satisifying bit of the race for me. Despite sore leg, I never dropped below 45kph the whole run in. I completed the race in 3:29 ish (off the Garmin). I think I was about 10 mins off the winning time. We got back to the club house, and a toasty shower.

The back of my knee was really starting to hurt now. With darting pains up and down my leg. I should have iced straightaway, but didn't. I did do some stretching and thought that would have been enough. But this morning I was not even able to put weight on the bloody thing. I got to the physio before lunch who concluded I just inflamed the ends of the hammy's (the bits that connect the bottom of the hamstring to the leg. He gave it a massage and ultra sound thing, and was told to rest for 3 days, icing and stretching regularly. I hope it does clear up in a few days, as otherwise the buildup to round 2 is going to be impacted.

But back to the road racing. I have to say I really enjoyed it, and will do another few before the end of the season. Its totally different to XC racing, which is intense from start to finish. Road racing is intense, easy, intense, easy, intense... and so on. Its also important to keep an eye on whats going on in the race - having an idea when the race will really start and being in the right position when it does so as to not get dropped. Looking forward to the next one already!

sounds good, how many were racing?

It is kinda strange to hear so people dropping out midway. Like yourself you would think they would continue, is only for the exercise. Though it must be lonely out on your own.

Hope the leg gets better soon.

That sounds deadly Rich. Great write up. Making road racing sound appealing- congratulations! Sounds like you one have done seriously well if you had held onto the peloton. 45Km/h is some pace!! Good thing I didn't enter, would have been dropped 2minutes in!

@ Cormac - I think there was about 60 in the combined C2 race, it was a nice size bunch to be in - as long as you were hidden in the middle shielded from the wind!
@ Steve - yeah, t'was deadly and I'll defo do one again. To be honest if the peloton had not dropped me there, the would have dropped me on the same climb on the second lap. But it would have been nice to have lasted a little longer with them. Ah well, lesson learned. The funny thing about the speed is that when you are in a group, even only 6 or 7 riders, you don't even notice the speed building!

Hi Rich,I was in Glending last night and found some of the trails at the top of the hill to the left of the entrance.Quite good, nice section over the rock!.Is there a full circuit in Glending or is it just that section?Let me know if you need a hand trail building.Fergal

yip - thats the boulder run - nice little bit. There's 3 or 4 more trails in the centre of the forest and another 2 or 3 interesting bits built by other people scattered around. They need to be marked up better. I might head out there tomorrow night to do a bit of work. If yer knocking around that neck of the woods again gimme a shout and I'll show ya around