Did my acupuncture /physio session on Thursday. It was 90 mins of pain - but the good kind :) . A lot of work was done on my left shoulder and IT band - mainly with elbows! After that I had an inch and a half needle inserted THROUGH the IT band at the point it was must tight (I'm not really into the acupuncture thing but I'll give anything a go to try and fix the root problem).

Friday Gene called around and we Ghetto'd his wheels. It was a very straighforward job compared to when I did it with the kit. The bmx tubes make life very easy - even inflated the tyres with the track pump.

Saturday was a fast spin around 3 rock. It was hard going but very satisifying to get in 2 hours non-stop up there.

Sunday was a 3 hour 40 minute spin around Kildare. We did the Kildare 100 route, which is pretty flat apart from the wall, which was as tough as last August. It was a good spin despite the freezing cold rain that rolled in about half way through, but what else can you expect in Jan? 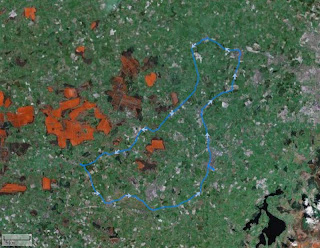 The bicycle scheme brought in by the goverment has me thinking about an upgrade on the TCR Alliance. I confirmed my company are offering it, so going to get some more details tomorrow - watch this space, I'm looking at this.