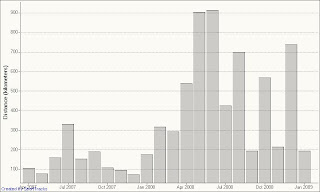 I bought 4 bikes and sold 2. I said goodbye to Specialized FSR and Titus Motolite and hello to the BeOne Briza 1.0, Cube Reaction, Giant TCR Alliance 0 and Giant XTC Carbon! Also had to buy a new Garden shed to fit them all in.

I'm not even going to tell you how much I spent on CRC and other bike sites!
And on to 2009. Well I got my first spin out of the way on the 2nd. It was a 2 hour spin around Kildare. I was to go on a long road spin today, but the weather was not great. To be honest it was not that bad either, but I made up a sufficient number of excuses to not feel too guilty. It's going to be the last time I'll dodge training though!

I'm going to focus on the NPS this year. The K-Capital is on also, but I'm not sure what the format will be. The first NPS is in late April, so I'm going to take it easy enough in January, and begin training in earnest in Feb. It will consist of 2 high tempo road spins and 1 high tempo mountain spin during the week, then a 4+ hour road spin at the weekend, with possibly a short, fast mtb spin also.