On Monday myself and a few of the guys from the club hit Djouce again. It was a great spin. We did all the trails at least once, tried a few drops and had a couple of spontaneous sprints on the fire roads. The weather was perfect and over all a super day.

As I am thinking about doing a duathlon in January, I did a 5km run. It was the first run in about 18 months and boy did it hurt - during and after. I had a couple of pains come and go in my ankles, but nothing too bad. I hope these runs get easier :)

And today was another road spin around Kildare - just 60 odd km's. Another super day, so I was happy just to get out on the bike. Before I get back to work on Monday I hope to get a long road spin in and/or a long mtb spin. 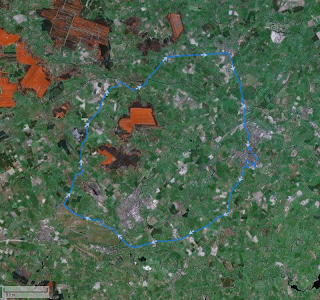 In between all of this I've been looking at the new bike - figuring out ways to drop it down below the 10kg mark. All I've learnt is that there is no cheap way of doing it. I'll be buying a new saddle, and may revert back to the 160mm rotor on the front by changing the brake caliper to a post mount. After that it would have to be the fork and pedals, which I doubt very much I'll be upgrading next year. I will investigate the tyres. The set on the bike right now are pretty light, but there may be some weight saving to be had and it would be quite a cheap upgrade. I'm trying not to get too obsessed with this weight thing as I'm a couple of kg's heavier now than I was in June, so personal weight loss is the easiest and cheapest way to drop the combined rider/bike weight!

check out justridingalong for some really light wheel deals

Cheers Cormac, but there is a strict budget on 'project lighten up' that would not stretch to a new set of wheels! The ones that are on it are not too bad I think.