Have managed to squeeze in a couple of spins between feeding sessions. On Stephens day I did a spin of the lake, but felt very heavy and slow :) . But it had to be done as I was off to the in laws for xmas dinner part 2 - the fattening. I did not got too overboard and today I headed off into Kildare for a few hours. I considered Wicklow, but I just did not feel like lugging myself up those bloomin' hills all day, so a spin on the flat (albeit at a fairly zippy speed) was on the cards. 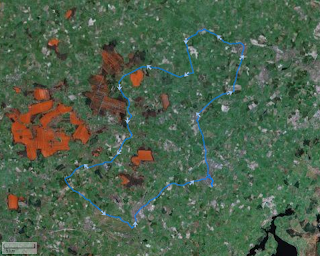 I roughly followed the Kildare 100 route, but missed a couple of turns and by passed the "Mur de Huy" - probably for the best. Still it was a nice spin on a beautiful day. There were some patches of ice on the roads, but nothing to be concerned about.

Tomorrow I'm doing a spot of trail building for a couple of hours. I'll bring the bike along too for a quick spin. Monday I'm back in Djouce for some more fun filled adventures.