Off Road and On Road spins

Yesterday myself and a couple of club mates hit Djouce. I was not too hopeful about the weather as it was damp and miserable in Naas, but in a typical Irish way, there was a miraculous transformation by the time I reached Djouce. Blue skies and mild. It was just a general blast around the main trails (XTC, GC, foxglove climb, benchcut etc), even managed to cycle up XTC.

Today was the big road spin. I left Naas and made for Enniskerry via Tallaght, Rathfarnham and Kilternan. After that it was up the Glencree valley on the Crone side. I met up with Jackie and Sean there and we headed for Laragh, via Sally Gap. They stopped for coffee but I decided to continue on. There were some good climbs. The Wicklow gap was a painful as ever, mainly as it was towards the end of the spin. But Kippure was the highest point reached. 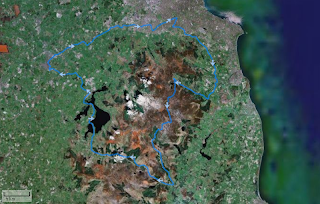 It was really nice to get the distance in, and will plan on doing something similar over the weekend or early next week. Its amazing what just 3 or 4 of these spins do to your general fitness and your ability to get aerobic fit much faster (and less painfully I hope).