Hello and welcome to my blog. I've wanted to have a blog for years, but never actually had anything to write about. But since Mountain biking has taken up a vast portion of my life... problem solved!

I began Mountain biking in November 2006. I bought a Carrera Vulcan from Halfords to get things going. I joined the Mountain Biking Association of Dublin (MAD) and joined them for a few spins in Wicklow. The Carrera lasted about 2 months before I got myself a Specialized FSR - now I was a (beginner) Mountain Biker!

Throughout 2007 I slowly built up my technical skills, but a job which had me working/commuting 14 hours a day hampered things some what. I decided to jack it in last June and take a couple of months off. During my break I began to get some training in for some Duathlons, and when I was not doing that or general house DIY, I built up my Titus Motolite. 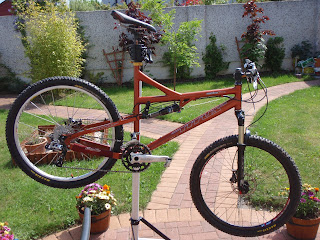 No one told me Mountain biking was so expensive, cos by August, I had to get back to work. An long commute (3 hours round trip) but more regular hours did not help develop my mtb skills.

So 2008 arrived, and a new job in March, only 15 minutes drive away - and more importantly 45 mins cycle landed on my lap. So that was my decision to make a big effort to get fit for the K-capital, NPS and marathon races that were to take place from March through to Sept of this year. It was also a little belated, as the first race was in March! So for me that meant 4 months of training and racing simultaneously. It also meant selling the Specialized (boohoo) and buying 3 more bikes (wohhoo!).

First off, the new job meant I could use the 44 km round trip as training. Enter the Be one Briza 1.0 - a cheap as chips (but perfectly capable) road bike. I bought it at Chain Reaction Cycles. The commute slowly brought up my fitness levels. I would occasionally take a detour home around Blessington lake to stick another 25km on a spin.

I also needed a new XC bike - and decided on the Cube Reaction XT 2008, again from CRC. A great value bike which is suited for someone getting into competitive MTBing, but not quite at the business end.

I had planned on racing in the Sports category during the K-Capital series to get into the whole race thing, but with some 'motivation' from club members I went for the Masters Category (30-40 year olds), one of the most competitive cat's out there! I missed round one of the K-Capital in Killruddery, Co. Wicklow due to a really, really bad stomach bug. In hindsight, it may not have been a bad thing as I was in no shape to race.

Next race was in Moneyscalp in Co. Down. A tough course. Lots of off camber wet rooty trails and nasty climbs. I started well, but things fell apart once I hit the muddy single track. After that it was a hard slog - or maybe I should say 'good experience' :)

Round 3 was in my favourite location - Djouce woods. I liked the course, felt the month of commuting was starting to pay off and I was getting the hang of the Cube. First lap went ok, but got a puncture on the second which ended my day. Decided to ditch tubes at this stage too as was getting punctures on a regular basis. Went for Joes no Flats and Maxxis Crossmax tyres.

Back up north for the 4th and final round - Castlewellan. The race took a lot out of me but I managed to beat the guys from the club I wanted to (just about!)

So, that was the K-capital finished, and my first 2 and a bit competitive races. I did really enjoy them (though probably not at the time!), but I knew I had to improve my fitness and technical skills. They do go hand-in-hand in many ways though. The best way to get through a technical section of a course is to do it fast, and to do it fast over 1.5 to 2 hours requires aerobic and anaerobic fitness. First off I increased the distance on the road, I also made sure that one day a week was spent doing hill climbs on the mountain bike on the Bone Shaker trail on 3 Rock.

The first round of the NPS took place in Ballinastoe, Co.Wicklow on a mix of purpose built trails and some build specifically for the race. It was fast and furious, and at the end I did not get to beat my club mate Arek, but when he went by me, I just had nothing in me to keep up with him.

I missed rounds 2 & 3. May was a tough month on a personal level and did impact the races I attend and training. It was also the month I put the most training in - over 900km's on and off road. At this stage I also decided to participate in the Wicklow 200 Challenge in early June. A 200 km road cycle around county Wicklow with approx. 2000 metres of climbing. That was a good excuse to go buy another bike! A Giant TCR Alliance 0 from Pauls Cycles in the UK. Its a super bike - a big step up from the Be One. Apart from a double puncture 50 km's in (my fault) it was a great day and took 7.5 hours to finish. I really enjoyed the road spin and will try to get a couple of road races in now I have a decent bike.

Round 4 of the NPS was days after the Wicklow 200 and I was not sure if I was going to be fully recovered for it. I took the following day after the 200 off. On the Tuesday I did an early pre-ride of the NPS lap. It was great to be back on the mountain bike again! And the course was awesome - lots of super single track, tough kicker climbs and very technical drops and descents. Took another break on Wed and Thursday was a quick road spin to keep everything loose. Got out of work early on Friday and me and a club mate did another few laps of the course.

I was going into the race hoping for a solid mid-table finish. Since the race was near Dublin, there was going to be a big field, with a lot of very strong racers. However, when the day of the race arrived, I was just not 'feeling it'. My legs felt very heavy - probably down to the 200 and the spins during the week prior to the race. But it was a big late to be giving out! The race started and I just pushed on hard to try to get some life (and blood) pumping into the legs. The aches gradually started to recede and I found myself where I wanted to be - in mid table. 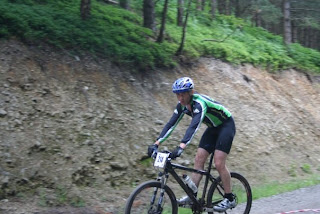 I also had a club mate 100 odd metres ahead of me! Perfect motivation to get me through the rest of the race. On the second lap we traded position a couple of times and were wheel to wheel at the start of the final lap. Morgan did start to pull away from me early in the lap, and I was torn between pushing on and try to take him or hold station, happy that I achieved my goal. In the end I did neither - I fell back a couple of hundred metres and decided I would push in the final 2 kms of the 8 km lap if he was still in sight. Unfortunately the best laid plans...
On one of the steep climbs half way through the lap I felt my right foot move quite a bit on the pedal. Next thing it came off the pedal! I looked down to see the cleat - which should be bolted to the bottom of my shoe now locked in position on the pedal! So with the ability to clip into the pedal gone, it was a nightmare on the climbs and descents. I was going to just throw in the towel there, but thought might as well get to the finish line. However, over the course of the last 4 km's I lost 6 positions and had a monster endo on a steep drop (which I was very lucky to just come away with only a couple of sore ribs). 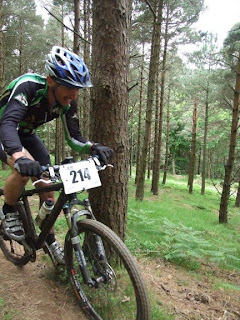 Made it to the finish disappointed and was so for the rest of the day. But these things happen and you just have to take the positives out of the race. For me that was a strong race up to the 'wardrobe malfunction' (as my club mate described it). I also have 3 weeks to the next race to bring the fitness up a little further. Plus our club league is starting next week, which will help the old race-craft!

So that's the intro - from November 2006 to 10pm Wednesday the 18th of June (listening to NERD)! I've covered a lot in this post and will come back to some of it in the coming weeks.

Decided to take a couple of days break from all bikes, but hope to be back on the road bike for a high tempo 30km's tomorrow evening then a spin to work on Friday and a long spin home.

(Thanks to Phil and Martha for the pics).

Email ThisBlogThis!Share to TwitterShare to FacebookShare to Pinterest
Labels: In the beginning...