I'm hurting a bit now. Did the big spin today - it ended up being longer than I had planned.
Set off at 10.30am from Naas. Weather looked good so ditched the sealskins for normal dinky cycling socks. Brought 1 and a half Torq bars and 2 bottles of high 5, each with a Zym catapult tab. 40 mins into the cycle, a couple of km's past Valleymount the biggest bloomin' downpour I've ever been stuck out in started... 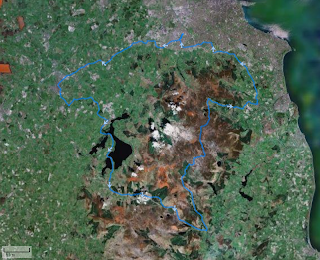 and kept going for about 40 mins. I was soaked to the skin way before it moved on though. I was not alone in that regard as there were a lot of cyclists on the road getting equally drenched. As I got to the top of the Wicklow Gap, and after a couple of thunder claps for good measure, the sun came out.

I've figured out that I don't do descents with wet rims too good. Was pretty unnerving on the drop to Laragh not having immediate stopping power that goes with hydraulic disc brakes. All I had were the Ultegra's and a swirling, gusting wind. So with great joy I got to Laragh village. I would not have stopped only I thought it might be a good idea to wring out some of the water from my socks and gloves.

Got the gear back on I started on the section of road which would bring me to the Sally gap via Glenmacnass waterfall. Met Morgan going the other way, most liking doing last minute preparations for the l'Etape. The climb was nice up past the waterfall and as I headed in a North Easterly direction I got the benefit of the wind behind, so made it to the Sally Gap quite quickly.

The plan was to head over Kippure and down to Cruagh, but I was feeling good and the sun was out so decided to drop down to Glencree and then head to Enniskerry on the military road via Cloon. Was a nice spin over the shoulder of Kippure - got really moving on the top with the wind behind me. Passed Mel on her Mountain Bike getting some training in too.

By the time I reached Enniskerry I was out of drink, so decided to drop into the Cycle Superstore down in Tallaght. Also as this stage various parts of my body were starting to hurt - legs, tum (probably from too much high 5 and not enough water), and my jaw for some reason! I was also swinging into the wind, and would have it in my face for the final 30km home - crap.

Needless to say the last leg was not very enjoyable. The tum cramping up was the worst though, so need to figure out the best way to avoid that.

So that was my mad weekend of roadieness. Feel pretty good about what I've managed over the 3 days. Did not make the 1,000 kms this month - 913 was the total which is still a record for me!
The plan for the week is just to chill out, with no cycling until probably Thursday when I might pop up to the local trails in Glending. Then its the NPS in Tymon Park in Tallaght at the weekend. There is a team relay on Saturday which will be a laugh, and then the race on Sunday.

I've put a lot of road training in this month, with very little on the mountain bike, but the course in Tymon park will be flat so it'll be all about speed and endurance as opposed to lots of anaerobic
effort. So hopefully there will be no mechanicals and the training will translate into a good finish.