Had the day off so and since there race on Sunday was cancelled, I planned on a long road spin into Wicklow today. The route was Laragh, Sally Gap, Kilbride, Blessington, but I spent from Valleymount to Laragh cycling though very heavy rain. I was pretty fed up so once I got to Laragh, I turned around and heading right back up the Wicklow gap again. One of the guys in the club had did from the junction to the Wicklow Gap sign in a time of 20:01 so I went for it. The climb back up was much better than on the way down. The rain had stopped and the sun even peeped out at one point. I got to the sign in 20:20. 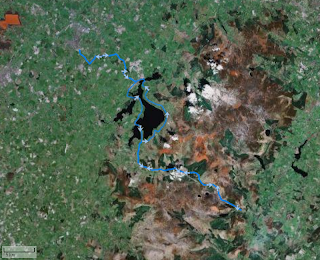 Happy enough with that - I'm sure I can go faster, so might give it another lash next week. The weather gradually improved on the way home, so I decided to hang a right before Valleymount to take in the lake drive.