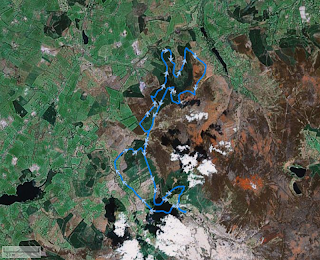 Wow, that was one intense race! Probably the toughest sporting event I've ever participated in, but it was well worth the pain.

I got to Kippure House have 9am to get signed in and prepare myself and the bike. There was a bike turn out from the club and everyone was in good spirits, especially as the clouds lightened up.

The course was 2 laps of a 30km loop. With about 7km's of road each lap. After that we had lots of climbing (approx 800 metres per lap) and lots of standing water. The 100 riders kicked off at 10am on the button and myself and Morgan kept in the top 30 for the 5km road section. Once off road and the climbing began we begin to move up the order a little, after 15 km we were 25th and 26th over all and about 8 minutes behind the elites! I was well chuffed at that point and pushed on as we rode into Dublin County and towards the mother of all climbs - Seehaun. On the first lap we cycled about half it. It was not just the steepness, but also the terrain that made it difficult. After that we worked our way back to Kippure House. Then my problems started - well, they actually started when I began to drink my SIS PSP22 Blackcurrant flavoured energy drink during the first lap. Quite soon afterwards my tum began to get upset. It was probably a combination of the drink and a couple of gels I took on the first loop, but I've never had a problem with the Torq or Power gels before. It got to the point where I was unable to drink at all. So just as I arrived at the start finish line in a time of 2:05 (which I was over the moon with), I hit the wall in a big way. On the 5km road section I could see Morgan gradually move away but I had nothing left in the tank at all. I forced down a torq bar and some drink and struggled on. I managed the first climb, but after that both calves were cramping and I was getting bad pains on the inside of my thighs and outside just above the knee. I was in a bad way, just spinning along the middle ring / smallest cog being overtaken by all and sundry. A guy from Bray Wheelers cycling club felt sorry for me and gave me a few energy beans. I was very grateful - they got me about a quarter of the way around the second lap! Then I hit Seehaun again. I walked the entire climb very slowly, and it hurt! At this stage I was passed by a few of my club mates and hung onto their wheels (just about) for the last 5 km to the finish. In the end I came in 17th out of 25. My second lap was 2:40 - 35 minutes slower than the first! In the end I was just delighted to have finished, but I have learnt some more about my level of fitness and also race preparation.
First of level of fitness - its not that bad. My first lap was pretty fast - 10th fastest in Masters. While my energy drink was a problem, I'd say the fact I have not done any real long distance (30km plus) off road work played a big part in a poor second lap.
Another problem was how I fuelled myself up the night before and the morning of the race. I think I could have eaten more suitable foods - will be studying this more in the coming weeks.
Also, my energy drinks issue. Clearly SIS PSP22 does not work for me (but SIS Rego does). I ordered a tub of Torq energy drink and will try it out over the weekend. If it fails, I'll be back on the high 5!

Email ThisBlogThis!Share to TwitterShare to FacebookShare to Pinterest
Labels: race