Just finished the Kildare 100. It was great fun and really well organised, just wished it was a bit longer!

We started at 10am just as a monster shower came over. The event was neutralised for the first 38 km's so myself and Arek spent the time just chewing the fat and putting on/taking off rain jackets. We had a food stop near Kilcock for about 15 mins and then another 20 odd km's before the pace (cop) car pulled off. Then things really got interesting. Myself and Arek were about 50 metres from the front, but once the speed restriction was gone, so were the top guys. It was a real eye opener as to the speed of elite riders. We decided to push on in an attempt to bridge the gap to the main bunch. But after a good 5 km's of us driving things along and a 15 guys just sitting on our back wheels, we decided to jack it in for a while and take a rest. The pace dropped right down and gave us time to recover. 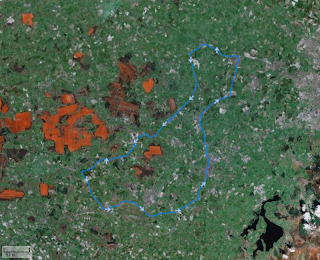 The one and only climb of the day broke up our group. It was short but quite steep (at the bottom some one had written 'don't look up'). Myself and Arek got up first, and through Kildare town a couple of more guys caught up with us. Across the Curragh we were hitting 50 kph on the flat - which was a first for me! After that it was a straight forward run back to Naas - for a burger, energy drink, cert and t-shirt! All in all it was a great day, despite the weather. It looked like about 400 odd people came out which was super.

The total distance was 93km's as a section of the route was flooded and made cycling it impossible. Total time was 3 hours 22 mins (with 16 mins stopped). Average pace was 2:11 (min/km) - that was down to the pace car for a good third of the route I'd say. I was at 90%+ HR for over 40 mins which I'm happy with.

I'll be taking it easy for the rest of this week. The final NPS of the year is in Castlewellan on Sunday and I want to really make a big effort for it. I might get some interval training in tomorrow or Tuesday, but that will be about it for me.