Monday - really should have stayed in and rested. I was a bit spent after the weekend ordeals, but Gene was keen to try the Slade hill climb so my arm was twisted. I'll leave out the gorey details but basically no records. It was a lovely evening for a spin tho.
Tuesday - Spinning class cancelled... woh hooo. Chilled out
Wednesday - Myself and Gene went back to Slade to try out the NPS loop. It was much drier, so was running much much faster. Managed 2 laps at full blast on the Cube but they were very messy laps, lots of overshooting of corners etc. Going to head up over the weekend to try the loop again, just a little slower this time!
Thursday - Spin into work the easy way
Friday - Spin into work. Decided to take the most country route to work, so to avoid all towns and villages I hung a right from my estate and heading to Punchestown, left at the junction and crossed the Blessington road and across towards Slade. 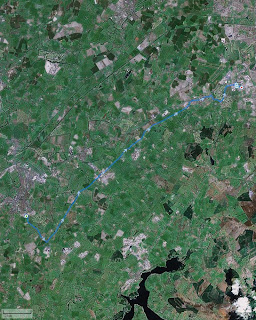 It was depressing to hit Rathcoole after all that nice quite countryside. The weather was a super morning (maybe a couple of degrees below perfection) and made me feel very lucky to be able to cycle into work at all, never mind on such a nice route as that one.
This weekend is going to be quite-ish. I hope to get back up to Slade at some point on Saturday for a couple of hours, but Sunday is eating and hanging out with friends.
I've been feeling a bit run down the last week or so. Between the lack of sleep, and lots of cycling I'm thinking I might just ease off on things a bit, so might end up doing some easy stuff the start of next week before resting up for Killarney.