NPS round 1/Leinster League round 3 review

Well that was an odd race. Things did not go too great for me on the run up. My son has been sick with a tummy bug / high temperature which had him (and invariably his parents) up for large amounts of Thursday, Friday and Saturday night. So I felt pretty spaced heading up to the race. The weather was glorious that morning and got there about 11am. Its great having a race only 15 minutes from my house! We got signed on and out on the trail for a pre-ride of the lap. The loop started on a fireroad which climbed upwards for 200 metres or so before dropping down to the ride for the first section of single track which was a fast descent into a swoopy forested section before popping out for a quick fireroad sprint before hitting the rabbit trail which swooped, climbed and dropped down the side of Slade valley for an age before you started to climb up to the next small section of fire road. It was only long enough to get a glug from the bottle before a short sharp climb up a loose rocky trail when then veered off to the left with the terrain changing to grass. We crossed over a bank via a wooden bridge, hung a right, and finally started to descend through more single track. We then took a left, up a trail I actually helped build about 4 years ago, before jumped off it to the right and descending down into a new forested section which was extremely tricky as it was a maze of roots, stumps and tree’s. Up over the specialized bridge and back into the sun with some schlompy bits to remind us we were not in Spain. Back into the forest via a very tricky fallen trunk and exposed roots and then back onto a gently climbing fireroad – more glugging time. Right turn into the next single track section lots of rough stuff with sharp rights, lefts, pallets, muck etc. A nice little drop onto the fireroad and sharp right. Then a sprint to the next single track section in the forest which starts straight before swinging left and further into the darkness. Some tricky, rooty corners before you move into deciduous forest and other some of the original trails. Then you drop into a bordering field to the start finish line. After that you’ve a kicker climb back up to where we started.

As in the Bunclody race, Masters would head off last, and as this was the first race of the season, it was un-seeded so it was a free for all on the start line. I thought I was maybe 10th or so from the front, but it turned out to be about twice that. And it turned out there were close to 80 in the masters field – probably the biggest I’ve seen in a single category ever.

So we were brought up to the start and set off. And I had my first problem. The lads on either side of me decided they wanted to cycle the line I was on so that was not going to end pretty. I came out the worst and had to come to a complete stop before starting off again. I sprinted up the fireroad trying to make my way through the backmarkers where the gaps allowed. But when we got to the first section of singletrack more frustration as a bunch of lads decided to hop off their bikes to walk down the slight incline! To be honest I was too tired to care and just got in the queue of riders for the rest of that trail and the rabbit trail.

Because of the numbers things moved slowly through the singletrack, especially on the sharp, rooty turns. Once someone in front had to walk it, it became very difficult to not do the same yourself. There were a few lads getting stuck into the fellas who were walking certain sections which is a bit much as it’s the nature of xc races that you’ll end up having to run/walk some bits.

We exited the rabbit trail via a nice kicker out onto the road where I got by a few riders. And this became the routine throughout the race – pass people when you could. However there were a few guys taking suicide lines into corners (out of frustration) which always had them losing out. I had an ok time in the singletrack but was being (even more) cautious than usual due to being feckin’ knackered. The second lap was pretty clear, but I ended up getting onto the back of a train of riders in the rabbit run on the 3rd so I was starting to lose interest fast. And on the 4th lap when Robin passed me half way through the last lap I threw in the towel and just spun home, which in hindsight was dumb as I think 3 or 4 masters riders passed me! I was just mentally shattered at that stage and I was just thinking of bed. I crossed the line in 17th place which was nowhere near where I thought I would finish, but that’s racing – everyone out there ahead of me wanted to race and be competitive – I didn’t (on the day).

Another factor was the amount of singletrack – there was a lot and some very technical sections, with corners which seemed to change on every lap. 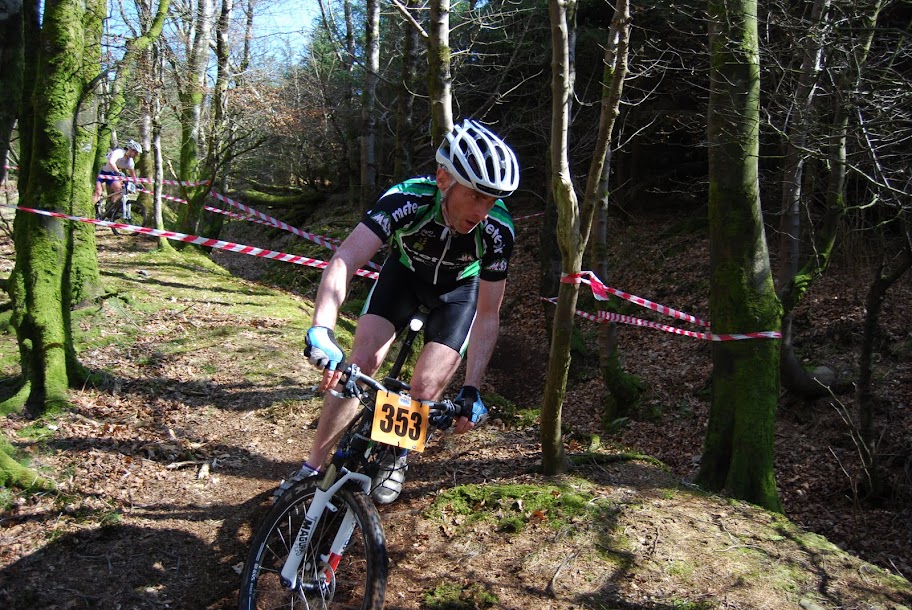 Again, its something I need to keep working on, but it’s the usual problem of getting the time to practice them on.

It was a great loop though and a credit to the hosting club IMBRC who put in a huge effort building the trails and putting on a great day - they even got the weather sorted :) .

I was glad to have fitted the Pronghorn riser bar – it made a huge difference on the tricky sections and with some more practice should improve things. I bought a cheapie riser for the Cube just so the two bikes are setup more closely. Again the Pronghorn was great, on the fireroad climbs it was fast and I felt I could rest, while catching people! On the techie stuff the riser made a big difference and as mentioned earlier will be out getting more practice when I can. In general the bike is going really well – for such a light frame its incredibly stiff and the power transfer feels more like a road bike, so can’t blame the bike for the poor form :(

And how could I forget that Pronghorn got their first win on Sunday! While I was wondering around the trails mid-table(ish) Oisin was powering his way to first place in Masters. A great result for him and a great testament to the Pronghorn hardtail!

Gene had me out last night doing the Slade hill climb, no record breaking times but was good to get out and loosen the legs. Nothing today (Tuesday) but hopefully I’ll be out on the Mountain Bike again tomorrow night. Then I’ll be back on the commute to work for Thursday and Friday. A quite weekend is in store as there are family events planned.

The next race will be in Killarney on the 25th of April. We’re on holidays in Baltimore in West Cork starting the previous day so it’ll be fun packing the car for an XC race and 9 month old baby (and 2 grown ups)!

you think you had a bad start.

that is me on the extreme right

What the feck happened there Cormac?!?!?