Was not sure whether to do the hill climb, spinning class, or neither and just have and easy day – in the end I did both. The spinning class was tough, not as excruciatingly painful as last week, but probably the 2nd or 3rd hardest of the year in terms of perceived effort and average HR/max HR. I got the jelly legs so that in conjunction with the miserable weather had me thinking about skipping the hill climb. Gene was on about an easy road spin in Naas so I was just about ready to throw in the towel when I started getting stick off of Ryan and the weather started to improve. Feck it. I decided to go for it, so armed with a bottle of Coke and a banana I set out for the starting point. 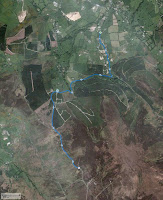 The course itself was 5.98 km’s long with 325 meters of climbing. Compared to my Slade climb its shorter and steeper, so not much to compare. Ryan had thrown out the idea on boards.ie and a bunch of guys from various clubs were interested.

So, I parked up in the Merry Ploughboy, got myself together and tootled up to the start at the bridge. There were a few boardies there all ready and after a bit of chat we started to set off at 1 minute intervals. I went about 5th or 6th out of the 11 or so who were out. Just before I started the rain started to come down, but as the first half of the climb was fairly sheltered I was not too concerned about a bit of rain/wind. I had done a practice start in the big ring, but after a couple of hundred meters in you had to start dropping down the gears fast, so decided better to start in the small ring – something I’d regret a little later.

Anyway, I got my count down and off I went, the first section was a ‘nice’ gradient with some kickers thrown in. I stayed out of the saddle for the first few hundred meters (something I’m trying to do more of as it’s the only way to get my heart rate up these days) and then settled in for the long slog. Things were going ok in the first few km’s – did not feel too out of breath and was regularly getting out of the saddle. Before the viewing point at the top of Cruagh I could see some of the guys who started off ahead of me so I had targets to chase down. I was still in the small ring but gradually moving up the gears as the gradient dropped off. However the chain started slipping in 3 or 4 gears which impacted my momentum (and annoyed the bejaysus out of me as I have had a replacement drive train the my CRC basket for weeks now but have not actually bought the bloody thing). So coming up to the turn at the viewing point I starting shifting gears, only to find the chain dropping off the crank. So queue 10 odd seconds of trying to get it back on and back up to speed.

After that that I put more of an effort in knowing that the worst had passed. The rain shower had cleared and we were greeted by a pretty impressive rainbow as we came out of the forest. Then it was an all out effort for the last bit. I finished up doing the distance in 18.02 which was the fastest time of the evening, but I think I could be closer to 17 if it were not for the mechanicals and I did not do the spinning class. I’m looking forward to doing more of these hill climbs during the year and I understand there might be a mountain bike equivalent up Killmashouge in the next week or so.
It was an enjoyable way to spend an evening and nice to put faces to boards names also. Looking forward to the next one.