Been a while since I've done one of these, and its good to be back!

So, as scary physio recommended I've been gradually getting back into training again. Sunday was a short road spin around Naas and Wednesday I did something similar.

Friday evening I thought I goofed up big time. I planned on doing another 1 hour spin but I'd only gone a few km's when I noticed lots of ominous clouds rolling in, so I decided to not risk getting wet, and swung around for home. But I sprinted back - trying to get as high a top speed as possible. Probably not such a good idea given I'm only coming back. And typically enough I started getting bad pains in my leg again. Queue a LOT of stretching. Saturday morning the pain was gone and all that was left was a tightness at the top of the calf. So I headed off to go on an easy club spin in Ballinastoe. It was the first time on the mountain bike in a few weeks and was good fun. Arek was there too and we managed to have our own little race which got the hear pumping. 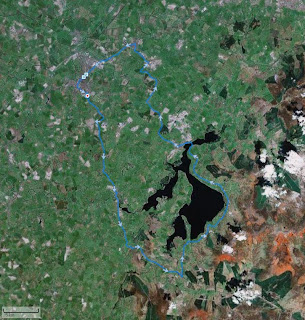 Today the weather was glorious and it would have been very tempting to head out on a long spin (5+ hours), but somehow managed to rein my enthusiasm in and settled on a 2 hour fastish spin around Kildare and Blessington lakes. I also managed to get in the big climb behind Hollywood village which is a killer. OK, the leg is a little tender and still just does not feel 'right' but its improving and there's lots of time to improve before my next race on the 14th of June (and 2 weeks holiday - yay!).