XC NPS Round 2 and other things

Killarney CC hosted round 2 of the 2010 NPS series on a whole new course just outside the town. My plan was to tie this race in with a family break in west Cork and on the map they did not look too far apart. 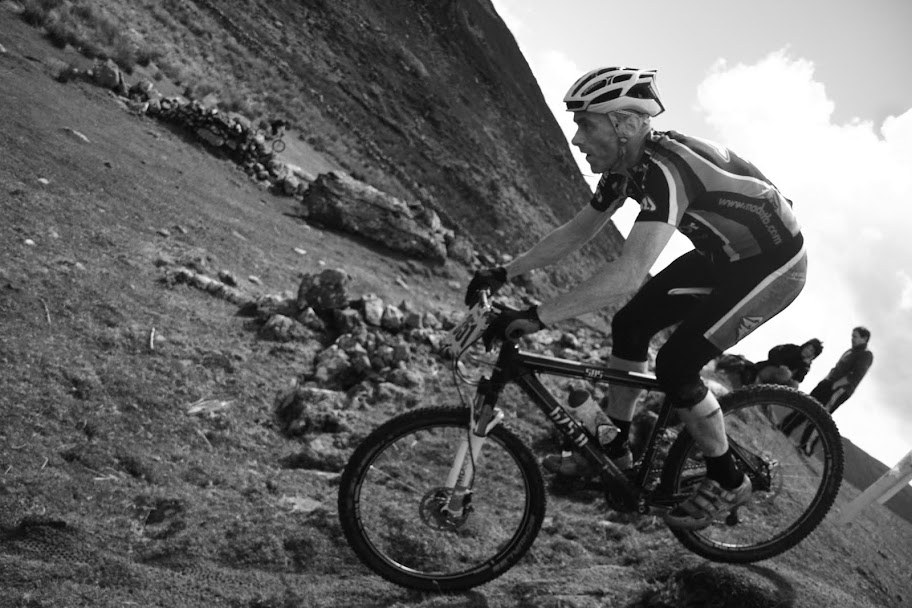 I did not realise how much of an impact the mountain range (or 2) would have on the time needed to get there. What I thought was a 1 hour trip turned into 2 each way... ah well, lesson learned.
I got there with plenty of time to get organised and squeeze a couple of pre-laps in. The course was set overlooking a lake and rugged valley - definitely the best backdrop for an NPS course I've ever ridden on. The course itself started with a double track flat section before a steep 4ish minute climb before hanging a left - still climbing, but not as steep, onto a boggy singletrack. Then you took a left into a mucky drop, which, if you watch the video below, you'll get an idea of how tricky it was for everyone. I tried it a few times in the pre-ride and failed miserably on every attempt. Then it was through a couple of fields with plenty of surprise drops, rock gardens and single track before coming back to the finish line.
I got up towards the front for the start, but was still about 20th when we got moving. Once we hit the climb I started to make up ground, but despite it being an old lane / double track, overtaking was still tricky and I ended up getting into the line for the descent. Oddly enough I stayed upright for it (and for every lap) as I found a line way out to the right which had decent grip. Over the course of the first 2 laps I pushed on hard and was about 6th or 7th before my problems arrived. 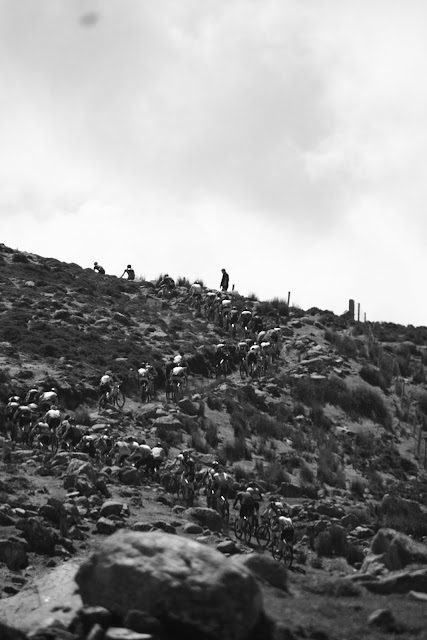 In the final wooded single track some of the marking tape had come loose and it got wrapped up around the non-drive side of the bike. I did not mind too much but hopped off the bike to get it cleared which took a minute. I was back on the bike and pushing again to make up for lost time/positions. However on the next lap, after the descent, I had another encounter with marking tape. This time it was on the drive side. I saw it wrap up around the crank and cassette but decided to chance cycling on. I did not get far before the whole drive train seized up. It was everywhere - on the cranks, the chain and cassette. So again I hopped off and started the job of unraveling the mess.
Luckily Phil was not far and while I worked on the cranks he cleared out the cassette. Another couple of minutes lost. As a plus I did get a breather, but a good 5 to 10 riders passed me so once I was cleared of the striped menace I pushed on again.
I started making good inroads again on the remainder of the 3rd and 4th lap and made up a fair few positions, but on the 5th, with no master riders ahead of me or behind, I eased off and coasted to the finish in 13th position. 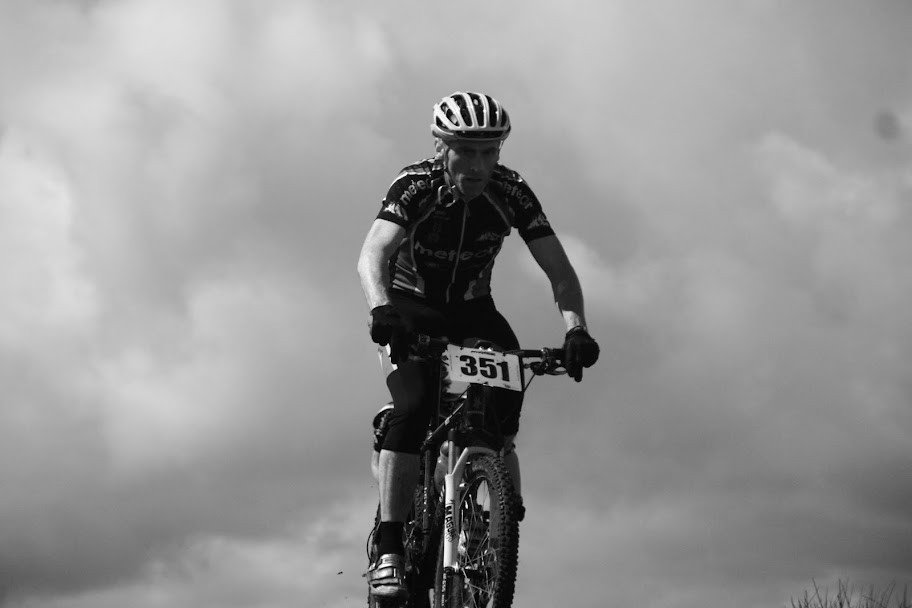 While the final position was nothing to write home about, I felt great throughout the race. The rest helped a lot - my average HR during the race was 172 whereas in the first round in Slade is was 158. So I'm thinking I was over doing the cycling or I was just a bit run down / sick. Also, if it was not for my problems with the marking tape I'd be fairly confident I would have finished comfortably in the top 10, so happy enough overall. Well done to Killarney CC who put on a great show. It was another well organised race and I'm already looking forward to heading back down again next year.
Another 2 hour drive and I was back in West Cork. The plan was to have a nice relaxing week with some good cycling. Unfortunately my 9 month old son had other plans and was in considerable pain teething. That meant 3/4 hours sleep a night for us and days wondering around like zombies... ah well. Needless to say there was not much cycling. I did manage a 2 hour road spin, but that was about it.
We were glad to get back home the following Saturday and just relaxed for the weekend. Monday was a public holiday so I decided to make amends for the week of eating and no cycling and went on a 4.5 hour road spin. I really fancied a spin with a lot of climbing but more importantly one that I would be in considerable pain afterwards! Starting in Naas, I went through south Dublin, Enniskerry, and up by Djouce woods and Ballinastoe. After that I hung a right and climbed up over Luggala and up to the Sally Gap. From there I took a left and worked by way across to Laragh. I met up with another rider and together we climbed the Wicklow Gap, picking up an Usher lad also. After that it was a dash across to Holywood and the last tough climb of the day. Then a very easy spin back to Naas. Was I in pain afterwards? I was in considerable pain by the time I made it over the Wicklow Gap! My legs were in such a state that if I stopped pedaling in order to rest them, I would get horrible aches building up in my quads immediately, so I had no option but to keep cycling! 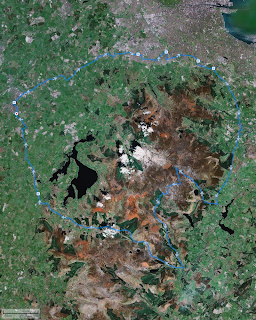 I was really happy to have done the spin as it was the route I had planned on doing and although there were many escape points/short cuts home, I did the whole lot - chuffed with that.
The following day I cycled into work, but I was feeling what I thought was a head cold coming on. It turned out to be my sinuses acting up again and they have been getting gradually worse as the week has gone by. Belfast is looking very doubtful which is a bummer, but there's not much you can do when you get sick. So its the Xyzal for me and hopefully I'll get back on track during the week as there is a road race next weekend in Wicklow I'm keen on competing in.
What else has gone wrong this week??? Oh yeah, my beloved Fox fork on the Cube are trashed - a full rebuild of the uppers is needed - arrrragh!