Myself and Oisin had signed up for this earlier on in the year as neither of us had ever tried an enduro event or had raced in the UK. We decided to gradually ease ourselves in and go for the 12 hour race - as opposed to the 24 hour pairs.

But the first job was actually getting to Plymouth. Some of the guys from the club were planning on taking the ferry from Rosslare, but due to time constraints we went for Holyhead and then the M5/M6. In hindsight I think flying might have been a lot easier, as it took us 9 hours from getting off the Ferry to pulling into the camp site, totally shattered. We pitched out tents and had some food/beer before hitting the hay. Unfortunately we were located by the toilets, showers and floodlights so there were generators going like the clappers for most of the night. I probably got 2 or 3 hours sleep. It rained too, which had be worried as I did not fancy having to switch to the Toro in the morning. 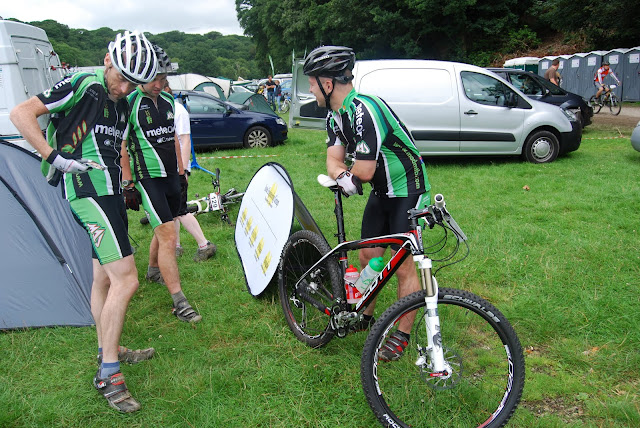 We were up early and got signed in - getting our goodie pack also. Then it was lots more food, and preparation. We had not put a huge amount of thought into tactics apart from we would both do a couple of 1 lappers full on and see how things went. Next was the race briefing by the organisers and Keith Bontrager himself. Before we knew it Oisin had to line up for the start. As we had no time to do a pre-ride it was going to be a steady first lap and the see what happens after that. The first lap was a little longer to stretch out the field before the loop began proper. Oisin stayed up the front for the mini loop bit and came through the start/finish proper in a good position. I wandered back to the MAD marquee and sat around for a few minutes before I just decided to go to the transition area and wait for the hand over.

Before I knew it I could see Oisin dropping down the hill overlooking the arena. I got myself together waited for him to come in. After a couple of minutes he came into the transition area and I grabbed the baton (which was a headset spacer on a necklace). I trotted over to my bike and exited transition and off on my first lap. After leaving transition you had a short section in the camping area before crossing a small river via a narrow bridge. It brought you out to a small section of fireroad and through a field. Then a nice little drop, sharp right and onto a disused fireroad which had you climbing for 3 or 4 minutes.

You then hit the first singletrack section proper. It kicked up sharply up to the right and worked its way through a mature forest. Lots of roots and swoopy turns before dropping out and across an embankment which led you onto the only road section. It was a sharp left turn into a climb. Unfortunately, the start of the climb was greasy as you exited the singletrack and I came out a big fast, so as I turned nothing happened and before I knew it I was skidding on the concrete with my calf and finger getting a good old grating. I was not planning on getting road rash at an mtb race, but there you go. I quickly got myself back on the bike and pushed it hard up the hill into the next singletrack section and got back into a good rhythm. The singletrack flowed along and you were never on fireroad for long before you were back on swoopy, technical trails. The variation kept you alert all the time, and there were a few sections which brought you into the camp zone which was great also as you got plenty of cheers along the way.

I got back to the transition area and Oisin was waiting. There was no time to chat – just hand over the baton. We communicated with a notepad back in the marquee and passed on messages via Aine, our team manager/mammy J. I felt good after the first lap, as it was only a 35 minute loop so really was no problem. I stopped into the first aid tent to get my finger cleaned up and then back to the tent. I had some fluid, checked the notepad and before I knew it, it was time to get back to the transition area. Oisin came in and we agreed on doing another 1 lap stint each before switched to 2 lap stints. So after a couple of fast 1 lappers we decided to switch to 2 lap stints. This would allow the other person to have a good rest and get some food in or get bike cleaned up. So Oisin came in and I went out. The first lap was fast, but the second was tougher and I the pace was notably slower. I got back in shattered and had some food. Despite having over an hour to rest up, before I knew it I had to get back to transition for my second 2 lap stint. Same situation again, first lap fast, second lap a lot trickier. But despite the going getting tough meeting and passing people on the course took my mind off things. There were so many racing on the course you would be calling ‘Rider up!’ every few minutes. 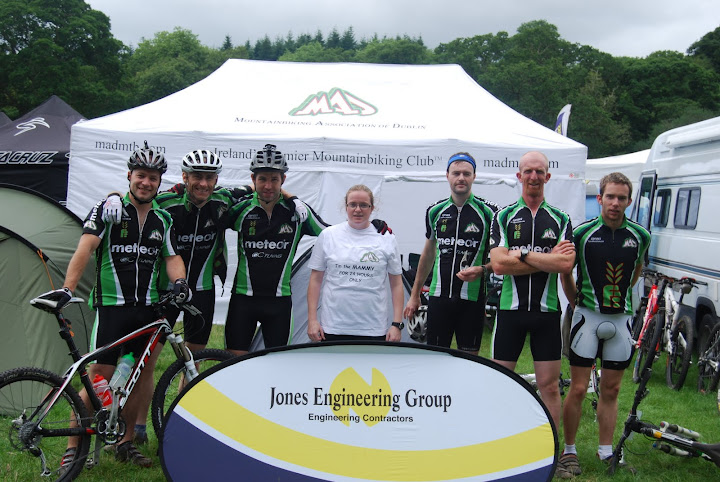 By the time I got in after my second 2 lap stint it we were over half way through the 12 hours. And then it started to rain proper. Because it was a warm evening, it was less miserable than you’d think, but an hour after the rain starting the singletrack descents were getting sliddery and one rooty climb was just about rideable. At this point Aine told us we were in 2nd place which came as a shock to me. I never really set any goals for the race and had been enjoying the race, but now we had something to defend it suddenly got serious!

It started to get tougher once it got dark. The rain had abated, but a freaky fog settled in the forest sections at the highest points of the course. And with lights on full power you could just about see 2 or 3 metres ahead. I guess it added to the challenge but it did not do my nerves any good. 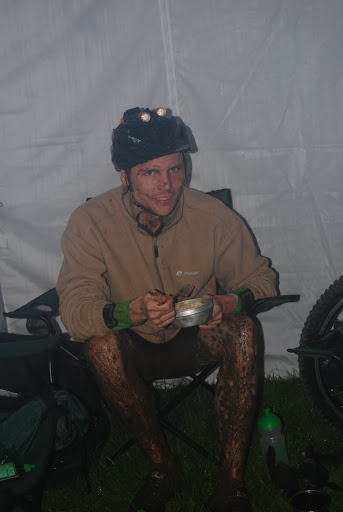 After a couple of more laps I was back in transition with the help of Aine trying to figure out where we were and more importantly were the guys in 3rd place were. We had figured out that the guys were about 20 minutes behind, so 2nd place looked good. Now the only thing I was worrying about was Oisin coming in before 12am and forcing me to head back out for 1 more lap, which I did not want to have to do! Luckily Oisin arrived at the finish line at 12:05 to my relief and 2nd place was ours.

Over the course of the race the Pronghorns performed perfectly, they were great on the climbs and had no problems over the technical stuff. And when things got schlompy neither of us had problems with frames getting clogged up with muck or branches etc.

We were both totally exhausted and in the mud and rain we all trudged slowly back to our tents. Unfortunately the majority of the other racers finished at midnight also so there was a huge queue for the showers. So we just decided to dry off as best we could, pull out our celebration beers and get some food. However we were so wrecked we enjoyed neither so tried our best to get some sleep as we had to leave at 9am the following morning to get the ferry. Unfortunately due to the general nature of a camp site and lot of generators around there was very little sleep. 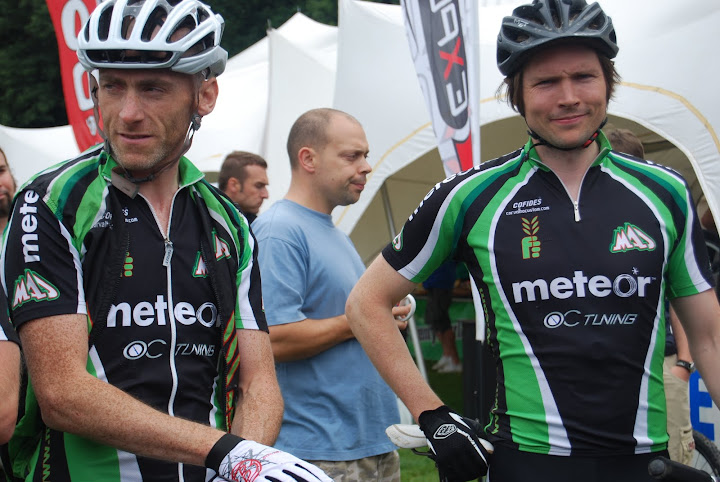 So I got up an managed to grab a shower about 5am and found a few people to chat to in the tented area before getting another couple of hours sleep before getting up for breakfast and packing up.

Despite the long distance travelled, lack of sleep and mucky conditions it was a great weekend – not just because of the 2nd place, but also to be a part of a big enduro event weekend. Ok, next year if we go we’ll be either flying or taking an extra couple of days to make sure we were not under any pressure. Plus, I think the night before the race I’d stay in a B+B to get a decent night’s sleep and then camp the following night.

More info on the race can be found on the official site http://www.twentyfour12.com/