It took a good week to recover after the twentyfour12, but I was still not feeling super. Did not do too much on the bike – a couple of spins to work, an evening mtb spin and a big road spin at the weekend – but the tank never felt full. But myself and Oisin had planned to compete in the first Irish MTB endurance race – The Bull Raid – hosted by Dundalk cycling club. Unfortunately, Oisin had come down with a cold which left me in a dilemma – try to find a partner to race pairs with, OR try the solo. I had sworn not to do another endurance race again after the twentyfour12, but as the pain receded I began to warm to the idea of doing it solo. So, with very little thinking I decided to go for it.

Preparation did not need to change – I just did very little. Unfortunately I had plans on the Friday night so instead of camping the night before at the site, I decided to head up very early on Saturday morning as the race started at 8am. To be honest I probably got a better nights sleep, even though I was getting up at a ridiculous hour. I had cooked up a mountain of pasta the night before and a quick zap in the microwave I had the perfect pre-race breakfast - well fueled for a good few hours anyway. Car loaded, and I was up the M1, making it to the race venue in Belurgan at about 6:45. I met up with the rest of the guys from MAD and began sorting out our pit area. I also had to re-register as a solo rider with the organisers. There was no time for a pre-ride and the only info I had on the course was from the guys who did the Leinster League race back in Feb, and that was not great. Basically there are serious amount of schlomp on the singletrack. The week leading up to the race was dry enough, but it had rained the night before so I was not too optimistic.

As we got everything organised in the pit, we got the call for the pre-race briefing. All commonsense stuff and straightforward enough – cycle for 12 hours and the person who’s cycled the furthest wins – simples.

The first difference from the twentyfour12 was the running start a la Le Mans.

So we all pushed out bikes halfway down a field, dropped them and walked to the ditch where we waited for the start. Once the bullhorn went we were off, trotting across the field to our bikes (sprinting was not on as all my tools and food would have been fallen out of the pockets and scattered across the course). I hopped on the bike and the race was on. Again, like twentyfour12, I had no plan in terms of pace setting, but thought it would be good to get a couple of fast laps in before settling down to a comfortable pace for the rest of the 12 hours. And that’s what I did, managing to keep with the 2 and 4 man team riders for the first couple of laps before dropping the pace. I had not planned on stopping much either. I was going to stop on every lap to pick up a bottle and around the 4th and 8th hours pull in for some food.

The course itself was very impressive. Technical singletrack, tricky drops, tough singletrack climbs with switchbacks, tricky bridges and not much fireroad. Oh and a motocross track thrown in for good measure! 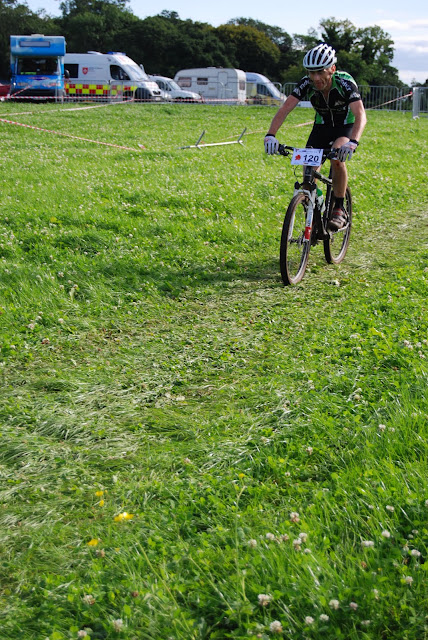 The course did start out wet, but within a couple of hours the trails were dry. The land owners did a great job laying hardcore on the wetter areas of the initial singletrack climb, so my concern at the start of the race proved to be unfounded.

To be honest the hours slipped by pretty fast and before I knew it I was in for my ‘lunch’ which Aine got for me (free pasta all day from the organisers). I tried to steer clear of the gel’s and energy drink as much as possible but at about 6 hours in I was running out of steam, so started to take a gel every second lap, and alternate between water and energy drink each lap, with the odd energy bar thrown in. And even tho I was using them sparingly, after a few hours the familiar tummy pains started to kick in.

As far as the race went for most of the it I had no idea where I was. I had a feeling I was up near the front, but after a few pit stops it was hard to tell. Again, team manager Aine came to the rescue and after a chat with the time keepers she had the info I needed to hear – in 1st place up 1 lap on Paddy, my club mate, who was in turn a lap up on Declan McCabe. At this stage it was 6:30pm and using my feeble maths I came to the conclusion I just needed to do 1 more lap, and I could take it easy doing to too! I was delighted as after 10 odd hours I was hurting. I crossed the finish line 40 minutes before the 12 hours were up and after a quick chat with the race director I handed over my timing chip and made my way back to the pit. I had completed 13 laps. If I had to I think I could have managed 2 more, but there was no point in putting myself through that! I starting feeling pretty sick as I sat down and in general I felt like I was run over by a steam roller. It took a good hour to summon up the strength to stand up again. I managed to pick up my belongings and pack the car before heading up to the BBQ. At this stage I still was not up to eating so got a cup of tea instead! As we sat around the blazing bonfire waiting for the prize giving I started to feel a bit better and managed a burger. 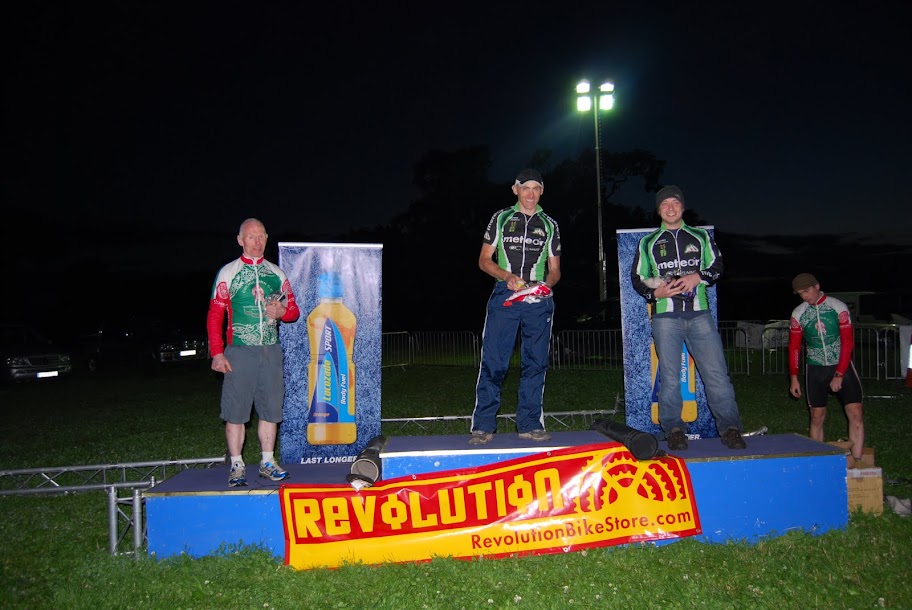 Later I felt much better and went to the local chipper for battered fish, half pounder and chips!

The prize giving was great – it was my first time on the top of an actual podium and we go some great prizes too. Unfortunately for me I left my winners jersey and other goodies behind, but did manage to hold onto the cash and trophy!

I went home that night and got to bed pretty late. But I was feeling OK the following morning so decided to do the Kildare 100 – bit silly, but I was at a loose end and had paid up a few weeks earlier… plus there was a t-shirt and burger at the end!

Again, the Pronghorn was perfect. This was a real Irish course, plenty of rocky technical stuff, but the bike did not have a problem - its rider on the other hand had the odd off the bike moment, but for the most part I managed to keep myself attached to the bike.

More info on the race and results on the official site http://twelvehourmountainbikerace.wordpress.com/