Sunday was the 5th round of the Irish NPS, held in Killaloo, overlooking Lough Derg. The course was always going to be tough. A long fireroad climb, with a slight drop to give you a breather, before climbing up again, then a sharp right up onto a singletrack climb which levelled out before, yes, you’ve guessed it, another climb. The final one being the toughest and the slightly wet conditions making things tougher.

Then, completely out of breath, you enter the forest and a rocky single track section, which climbed up and down over and around various obstacles. A very technical section followed with 360 turns on the descents followed by drops through gulleys. Less hairy descended followed, but not before you were heading sharply up again before a chicken-wired drop (!) and then onto a fireroad section. Then a sharp right and descend down to the last singletrack section and onto the start finish line. Jeez, even writing that description is exhausting me, so you can imagine it in a race.

I was seeded in this race (7th), so was on the second row. To be honest it didn’t really matter where you were as you had almost a mile of climbing so there would be no sprinting for the first section of singletrack.

So we were set off. Rob Tobin set the initial fast pace and with a few hundred meters the lead group was whittled down to about 6, with me hanging on by their coat tails. It was fast, but I did not feel too bad. I’d defo done harder sessions so was happy to hang in. As we got to the top of the climbing section the main guys moved away and I had only had Andy Newman and Kevin Stanley in view. The singletrack was tough, but going through it the first time I was happy enough.

The second lap was ok too, it was slower and I was making a lot of mistakes on the singletrack, but I had said to myself to get through it at my own pace and get a slow, steady flow the whole way through rather than trying to keep up with guys who were much stronger and messing it up.
Things started to go pear shaped at the end of the 2nd lap. After the chicken wire drop I ended up in the ditch due to taking my eye off the trail – very dumb., but it got worse. While still cursing myself for the first crash, coming off the drop onto the fireroad at the start/finish section, I somehow managed to slide the bike and ripped a layer of skin off my knee cap and elbow. Really stupid thing to do caused by a lack of concentration. I lay there for a few seconds just to see how bad the pain got. Once I figured out it was at a bearable level, I hopped on the undamaged bike and pedalled off. 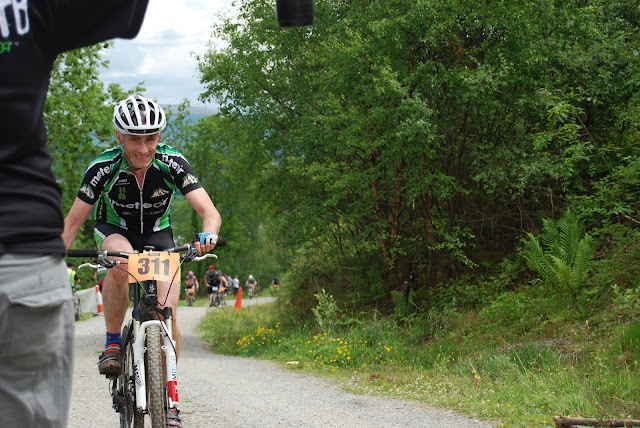 Lap 3 was hard, on the climbs the knee hurt and I could not get any flow through singletrack and would have been faster walking it. I lost count of the number of crashes – one of which twisted the seatpost/saddle 90 degrees off.

The 4th lap was hilarious. I had slowed to a crawl on the climbs and walked large parts of the singletrack as I had lost all confidence on the bike. I had totally given up on racing to the extent when I saw a bike computer on the trail, so I stopped to pick it up thinking it was Gene’s and it would be the sound thing to do. Turns out it wasn’t his and because I stopped he passed me a little further up the trail! 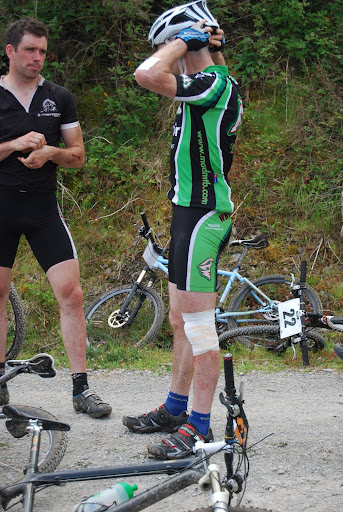 14th position sucks. It’s very disappointing as I should have been more like 6th or 7th worse case. But if yer not making mistakes (and learning from them) you’re going nowhere.

So where did it all go wrong? Well....
• The previous couple of nights I did not have great sleep – between the little guy on Friday and a party being held in a nearby house on Saturday, I didn’t get my usual not much 6 hours. But there’s I can do about that.
• Tyre pressure wrong – so wrong. There were probably close to 30 psi as I was thinking about the long climbs in the race and because the rims were not UST I was concerned about rolling them off and game over. It was a complete disaster, as the damp, rooty sections needed plenty of rubber on them to keep you upright. I was in Slade yesterday and dropped it closer to 20psi and it made a huge difference in the rooty singletrack section.
• Maybe went off too hard from the gun – not entirely sure about this. I felt good on the first couple of laps and took the gels, but I had dropped right off on the last 2 laps. But I think that might have been a combination of normal tireness and just mentally already being in the car, driving home. 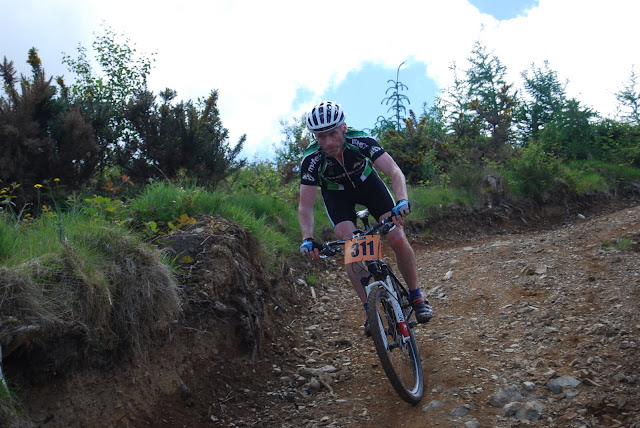 Thanks to Conor for the pictures