I was not expecting to race so soon after the Lough Derg race as it would have meant a whole day away from the family again, but somehow I managed to get the pass so I was in business!  We made it up early and got signed up quickly.

The course was very similar to last years race, with the only real difference was the first section of singletrack had been replaced with a wider track section that brought you up to the proper climb.  This was a good idea as it gave riders a better chance of passing before you hit the singletrack.  The next interesting feature was 'The Drop' - a step with a steep rock face which then transitioned to flat ground before you had a choice of lines to get you through a wall.  I did not do the drop last year as I'd turned up late and had no chance to practice it so didn't fancy doing it first time in a race.  And in the end I only managed 2 laps before I had a mechanical.  I headed up to have a good look at it this time as the chicken run added 20 seconds to every lap which in an S1 race is not a runner.  It was a funny drop as the challenge was in your head.  When you arrive up to the drop, you can't see where the front wheel is going to go due to the step, so its all down to trusting that after the 30cm drop into fresh air, you hit the rock face (which was probably 'just' at an 80 degree angle) and then your done.  Its over in the blink of an eye and your lining up for getting over the wall and into the berm on the other side.  So after plenty of humming and hawing, I finally just did it, and what do you know, it was doddle.

After that it was a really enjoyable few kilometres of rolling, swooping singletrack with some bridges and other features, before you went into the field and across the start/finish line.

I did a bit of a warm up and then we were called to the line for the start.  I was late in arriving, but it worked out ok as the starting area was so wide almost all the riders were on the front row.  I went to the outside of the line as just thought 2nd row on the inside would lead to plenty of tussles and blocking.  We got the count down and a before I knew it we were sprinting out in the open field section.  After about 200 metres there was a hairpin turn which brought you back to the start finish line for the start of the first lap proper.  I'd done much better than expected and probably in the top 6, but unfortunately I started to think (instead of going full gas) about the long climb ahead and that maybe it would make more sense to slow down and pace myself up.  It was a bad call - first lap of an XC race is full speed all the way, track position and also I suppose, imposing yourself on the race are hugely important.  So I quickly dropped back as the faster guys came through.

I worked my way up the climb and even my 'pacing' was probably a bit too fast and I found I was struggling to keep up with the riders around me.  The drop came and went before I even realised - so that was not going to be an issue for the race.
On the second section of the lap I made a silly mistake.  I was holding up a few riders, but no one was attempting to pass me - apart from one guy, who what passing gave me a gentle nudge.  It was not intentional and nothing major, but it happening on a singletrack climb meant I ended off of the trail and had to stop.  Then 5 or 6 guys passed me.  I was pretty annoyed, but got back on the bike.  I was annoyed for another lap and a half - mainly with myself for getting into the situation in the first place, but I eventually snapped out of it and got back to focussing on the race, looking to be as fast as possible in each section.
I eventually began to catch up with Vinny and Alfie on the climbs but lost them in the techie sections.  This yo-yoing continued for a lap or so until Vinny dropped off the pace and Then it was just Alfie.  It was not until the last lap that I started to catch up with him and made it stick.  We got to techie section for the last time and I managed to keep close to Alfie for all of it apart from the very last section where he put in a bit effort and zipped out of sight.  I was not ready to give up year so I charged on.  As we came into the field we were neck and neck.  I was not sure if he was keeping something in reserve, so I got the KTM into the biggest gear and sprinted the last 50 metres for 12th. 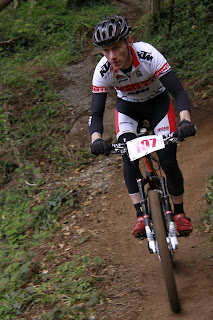 12th is not as impressive as 3rd the previous week, but I would never have expected to come close to the top 5 given the quality of the field and how hard XCO is.  But its a start, and a better one than I had last year, so can't complain.  The next step for me is a top 10 finish.  To do that will require plenty of club racing, intervals and more racing.

My next race will be in Lady Dixon Park in Belfast (won't make Cork), so that gives me a few weeks to look to improve.