The 2010 Irish Cross Country Marathon Championship was hosted by MBCC and was run over and around the Ballyhoura trail center on the Limerick/Cork Border. 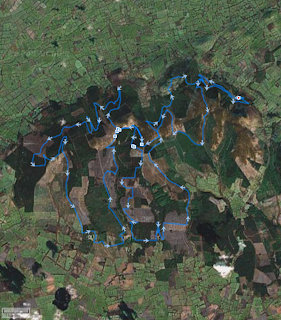 I wanted to give this and the Cooley Thriller a really good go as it was the last 2 races of the season and I wanted to end it on a high. Unfortunately mechanicals put a stop to my gallop fairly early in Carlingford and the build up plans for the Champs were not going as I wanted either. A combination of bad weather (yeah I know), and being busy had reduced by training plans down to bare minimum, so I was not particularly confident going into the race.
We got down to the venue for 10:30 and after a bit of messing around found some decent parking. With the race starting at 11:30 there was not a lot of time to do anything other than get signed up and changed. The first climb would do as my warm up. So we all started gathering oat the start line. It was going to be gridded by category but it was to be a mass start. And considering in the first 4 km's we were climbing 250 meters, no one was worrying about being caught behind slower riders.
Myself and Oisin were chatting at the start and once the flag was dropped we were up the hill attempting to pass as many riders in front as possible and as the kilometers rolled by the fire-road began to empty of riders until all I could see nearby were Oisin, James McCluskey, Mick Jordan (Vet), Evan Ryan and Ryan Sherlock (both elites). There was also another guy I didn't recognise, but looked like he meant business - more about him later. It took me 15 minutes to reach the top of the first climb and I felt pretty good - even managing to catch Evan and get ahead of him for a short while.

However before the first feed station, Evan had pulled away slightly and James passed me and was just up the road, with Oisin just a little ways back. I tried to keep the James in sight while trying to take a decent drink. The plan was to stop at the feed station, but James didn't so I thought better of it as I still had enough in my bottle to get me to the next station at 26km. We dropped straight into the Singletrack section and I tried to keep James within sight. Oisin who would be much better at getting a good steady flow on the trails, got past me and pulled out a gap. Luckily for me, it seemed that at the end of every singletrack or techie section was a fireroad climb, so anything that the guys gained I could claw back.
A similar pattern followed for the next couple of hours, the guys would pull an advantage on the techie stuff and I'd get it back on the climbs. I pushed as hard as I could on the descents, but you needed your wits about you as they quickly went from being ridable double track to a strip of clay 6 inches wide with gulley's either side. There were also huge (and I mean huge) ponds of water to contend with. In fairness to the organsiers, they were marked well for the most part and you knew which was the shallow end! I did have problems with the mud/bog holes - one in particular on a corner which I went around the outside of only to find the front wheel sinking up to the axle!
Things went bad for me on one rocky climb. Very silly mistake had me over the bars and face planting the rocks. I damaged my finger which started to swell up straight away, but I also got some serious road rash on my left shin. It was the worst pain I've ever felt. I was convinced I smashed it to bits. Pretty sure I shed a tear in pain at that point and not to proud to say it either! I managed to pick myself up and hobble up to the end of the rocky section. Blood was starting to drip from my leg at this stage. My head dropped and was I was not sure about what to do - leg hurt, finger hurt, face hurt, halfway through a marathon race and I had no idea where I was. So after a minute or so I just got on the bike and tried to pedal. It hurt a lot at first, but the course flattened out slightly and each pedal stroke was a little less painful.
As we began climbing up again I could see a number of riders ahead of me working their way up the hill. As I got closer I could see another bunch stopped at the top and pointing in different directions, chatting away. Not normal behaviour in a bike race :) When I got to the top there was Ryan, Evan, James, Oisin, and a number of other riders. Turns out the course was not marked 100% correct and we had reached a dead end. The only solution was to going back down the hill to a turn which was marked off by ribbon. So we all went back down the hill and broke the tape blocking the correct route. A marshal confirmed that we were right and apologised. This detour added about 1.5 to 2km's onto our race and I think it was a good thing to happen for me as it totally took my mind off the pain in my leg.
So we were off again, descending at high speed, dropping in and out of singletrack and up climbing fireroads. I kept drinking and had a few gels and a bar (took ages to chew the bar but was a nice treat to have!) and felt pretty ok apart from on the kicker climbs which did take a bit out of me. At this stage of the race we had about 15 km's to go. Oisin, James and I were all together again and coming up on the last feed station. I went to get a bottle as muscles were starting to tighten up so cramp was not that far away. James did also, but Oisin kept going. James grabbed his bottle and chased after him. I just rolled up as I was sure there would be a hill soon enough to catch them on. There was sharp left turn shortly after which led onto a rough techie climb. I caught up with the lads fairly easily, so was beginning to thing they might be in a spot of bother (finally!). We rolled out onto a flat fireroad section and I decided to push things on a bit. Based on the distance traveled to that point I figured we had about 14km's to go with at least 3 of that downhill. So with some very fuzzy thinking and logical applied I picked up the pace a bit, passing James first and then Oisin. I had a quick chat with him and it turned out he was cooked.
We hung a left and onto the final climb of the day. I could hear a bike right behind me so kept increasing the pace gradually - there was no way I was going to jump out of the saddle and sprinting at this stage, would have ended up cramping my entire body! A few minutes later all I could hear was my bike and my heavy breathing, but I kept the pace up as it was all or nothing at that stage.

I got to the top of the climb and was directed down the singletrack. I thought I was only a kilometer from the finish line, but it ended up being closer to 3. I kept pushing it on the descent but did not enjoy it that much as I was hurting at that stage and I was also starting to think about the fella I saw at the start and who had been up front for most of the race. I began to think he was a master and I was just racing for 2nd place. So by the time I got to the finished I had resigned myself to that and was happy to settle for the podium. As it turned out he was a master, but was racing under a day license. It was afterwards I found out it was Anthony White, a top UK endurance rider. He came in 3 minutes ahead of me so I was quite chuffed with that.
So, in total I covered 64km's, had an average HR of 153 with a MAX of 167.
So, once it was confirmed that Anthony was not eligible for the title it was relief for me and I could relax finally. We had 2 podium appearances - one for the overall race and one for the national champs. So that meant a 1-2 for MAD in the masters champs with Oisin coming in a few minutes behind me. James DNF'd - I'm not sure why as he seem to be ok spinning back when I left him, and seemed fine when he rolled in.

To be honest the whole thing was a bit of a surprise - not just winning on the day but coming from starting mountain biking 4 years ago, or from 2 years ago when I started to take it seriously and train properly (well, when training could be fitted in) - its just been an interesting journey. And just in case I don't get me anymore of those national champ jerseys, this one is being mounted along with the medal! 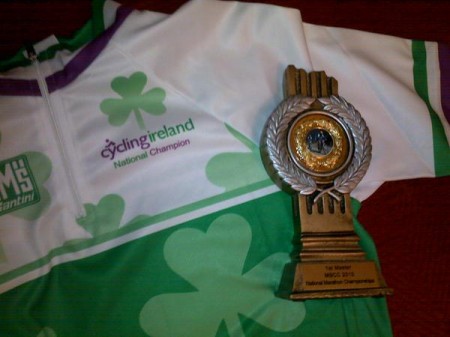 nice write up. The scar will be something to show the grandkids and tell them you got it by becomming the Irish champion